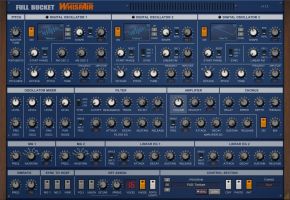 WhispAir by Full Bucket Music is a Virtual Instrument Audio Plugin for macOS and Windows. It functions as a VST Plugin, an Audio Units Plugin, a VST 3 Plugin and a CLAP Plugin.
Product
Version
1.1.2
Product
Version
1.1.2
Tags
Tags:Wavetable SynthFull Bucket MusicKVR Developer ChallengeKVRDCKVRDC21Universal 2 BinaryVA synthesizerWhispAir
Instrument
Formats
Copy Protection
None
My KVR - Groups, Versions, & More
76 KVR members have added WhispAir to 6 My KVR groups 95 times.
Not In Your MY KVR Groups
(or group limitation prevents versioning)
39 +3 Favorites
37 +1 I Own This
14 0 I Want This
2 0 My Actual Studio
2 0 My Perfect Studio
+1 in private groups

WhispAir is a software instrument for Microsoft Windows (VST2/VST3/CLAP) and Apple macOS (VST2/VST3/CLAP/AU). It is written in native C++ code for high performance and low CPU consumption.

Average user rating of 4.80 from 5 reviews
Read all reviews Add A Review

In my opinion, all VST developers are heroes because if it was not for these people of deep technical knowledge and hard work, all of us music producers would not have certian tools to do our smithing with, one of the heroes i am highlighting here is Björn of Full Bucket Music and one of his great designs - WhispAir, i cannot beleive that this is free! 3 hard syncable Oscillators with multiple waveforms to choose from (And you can load your own wavetables), 24db (Especially high pass) filtering for the sub bass addict (Like myself) all coded in C++ making the tiniest footprint on my cpu, this is one tight synth!, it gave me great pleasure to give a donation to Full Bucket Music because i don't want these sort of vst's to stop coming forth from a gifted, natural talent.If the KVR rating system went up to 10 stars WhispAir would be the full 10 stars from me.

Full Bucket Music make very good free plugins, and this is one of their best. Congratulation.

I tried this one recently and was surprised of the many unusual features and the great chorus effect. Sounds very good and I like the own character of it. Loading wavetables is very easy and especially the easy-to-find tables for the Waldorf Blofeld are perfect matching with the WhispAir and make it very versatile. Good one.

This is a really well designed synth....

Everything is laid out on one page so it's easy to drive once you get familiar with the setup...

There are lots of modulation options that bring a range of dynamics into play and help to give real character to the voices and the ability to load your own wavetables is a powerful feature...

One of the things I like about Bjorn's synths is that they have a slightly "raw" sound and this is a positive thing when it comes to the mix...

I got lost for a few hours playing with WhispAir and then used it in a track and it was all good...

Tightly coded with a small install size, a powerful sound and a resizable GUI, what's not to like ?

I played yesterday with WhispAir, and it is a very capable synth, mainly because all functions are on screen. So it is very intuitive and straightforward, recommended for a newcomer to wavetable synthesis. Although it ships with a limited number of wavetables, the ability to load custom ones takes it to the next level, almost in par with Pro synths (or even better, as f.ex. some commercial wavetable synths do not import custom wavetables). To my impression, the synth could have benefitted significantly by the existence of a second filter and/or a richer collection of filters (e.g. notch), but I understand that the developer aimed to keep things simple, closely resembling to what a hardware wavetable synth of $300-$400 would have offered. In general, WhispAir is a very decent synth, covering an area which had no similar ones (that of a hands-on wavetable synth, without blows and whistles), from the user perspective seen as kind of a hybrid between Odin2 and Vital, keeping good features from each of them, thus addressing the new user (who would likely opt for a freebie, but wouldn't feel comfortable with all the details in Vital, but looking for more than what Odin2 offers), while being much easier to learn (and focused for that reason) than equivalent commercial ones. The chorus fx that it comes with is very powerful, and in my testing I tried the synth with my preferred delay and reverb inserts, which complete, to my taste, adding character to the synth patches. An EQ before the rest effects was also added, which is another feature I'd like to see as a built-in fx in this synth, in a future version (the first feature being a bigger filter section). Overall, I would like to see it going well in the competition of the KVR, so as the developer gets compensated for their effort on this great synth idea. For me, it is a quick-and-easy sound setup synth, so it is definitely a keeper.

I download 40 Blofeld Facebook syx wavetables, but how do I install? The files are syx, but WhispAir only recognise .fxb. I tried to rename it, but it didn't work. Any tip?

Got it. Thank you.

The UI does not respond in M1/Big Sur, and it seems the case for all other plugin made by full bucket music ...hope thy're will be an update.

Well, I just uploaded the "METAL" version which fixes that problem.

that's wonderful ...just take all the time you'll need for it and again, congratulation for winning the contest .

This plugin doesn't have an inbuilt patch librarian. I use Cubase and I've not yet understood how to save and load my own patches in a plugin like this. Can someone explain, please?

in the manual, page 8, there's written the "Control Section". There you find the "Menu"-Button with Load/Save functions for your own Patches.

I hope that will help you:).

Have a great day.