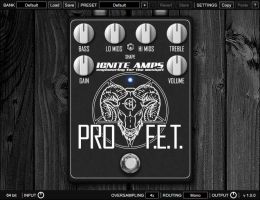 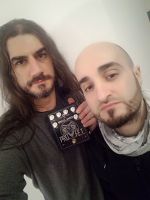 KVR has been running the KVR Developer Challenge throughout most of our history. For the KVRDC 2018 there were 26 entries and the winner, as chosen by the KVR community, was ProF.E.T. from Ignite Amps of Rome, Italy.

Founded in 2006 Ignite Amps is the brainchild of Federico Berti, and Carlo Costabile, and this was their 3rd entry into the Developer Challenge.

For the last few years The National Association of Music Merchants (NAMM) has been hosting the winner, and this year is no different. Ignite Amps will be demonstrating all their products in Booth 19200 in Hall AC North at the NAMM Show.

There are a number of things that make the winner this year so interesting. First, is the fact that Carlo and Federico are very focused on guitar products, and in fact used the winning plug-in as a model for a pedal that they have been subsequently developing and will showing at NAMM. On top of that they will also be showing Emissary, a 2 channel 50W all tube head that takes the name of one of their plug-ins.

Taking a little time off from soldering and de-bugging Federico and Carlo were kind enough to be interviewed.

You are both musicians?

C: We play some instruments. (Both laugh).

You model guitar amps. What guitar-players do you like to listen to?

F: That's a hard one. If I had to choose one right now I would say Greg Burgess from the metal band Allegaeon. He is my favorite guitarist.

C: I am a bass player, and I like a big, heavy sound for bass, so I would say D.D. Verni of Overkill. It's a metal band from the East Coast.

What are your technical backgrounds?

F: We both started at the same university. That's where we met. We are both passionate about engineering and music, so the idea of making software came some years later. We started building physical amplifiers.

I've been in the IT field for now 12 years and back in 2009, I decided to build a mathematical model for the 12AX7 vacuum tube and I simulated a full pre-amp. At the time we were building a 3-channel pre-amp, so I created a model of it. It was really close to the hardware version so we decided to focus on the software and prototype the circuits instead of building them and get to the final circuit after a lot of modifications. It's a big advantage in terms of cost and time.

Carlo, are you the electrical engineer? One of you must be if you're building an analog amp, right?

C: We took the same courses at university, so we have a similar background. I started building the physical amps just by chance, while Federico was doing the same... 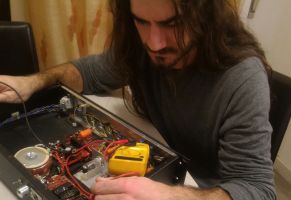 C: I'm a wrench type. I like to work with my hands. The first amplifiers were probably illegal in many places. Nothing caught fire, but I wouldn't say that they were so safe to use. They were only for my own personal use and I did get bit by the current a couple of times. That taught me pretty quickly how to implement a safe amplifier.

Ouch! So, one of you was risking his life building a hardware amp while the other was safely writing software...

C: It wasn't a decision. It just happened. Maybe because I can't write a line of code. We split our roads, but going parallel—Federico would write the code and I would build the hardware.

F: Yea, we complement each other pretty well. 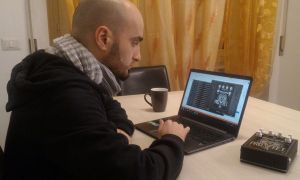 C: We wanted to be a hardware company, but then we realized that the software Federico did was so close to the real thing. At that point, we knew we had something good. We could try the circuits before we would build them.

We entered the KVR Developer Challenge back in 2014 while we had an amplifier build going on. Federico did the code for that, and we came in 3rd. It was our original Emissary plug-in, probably our most famous plug-in at the moment.

Wow! third time was the charm...

C: Persistence is the key.

What inspired you to enter the Challenge the first time? 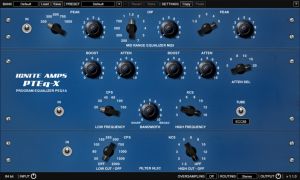 F: We were doing several plug-ins so we thought it would give us a good exposition. Plus, it was the opportunity to model something that wasn't really guitar related. In fact, I did a model for the Pultec equalizer, and it came out pretty good, so it was an interesting challenge. We call that product PTEq-X.

C: And we wanted the money (laughter). We were really interested in the whole experience and giving exposure to Federico's software, and obviously coming to NAMM.

How did you first come in touch with KVR?

F: The forums. I was into guitar recording and before I built my own amps, I was using Guitar Rig and Amplitube, so I was surfing around the Net I discovered KVR and there were a lot of users of this kind of software.

Of course you are excited about the new hardware pedal and amplifier that you will show at NAMM. Are you working on new software products? 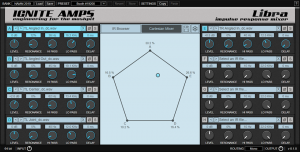 F: Yes. It's in beta stage at this point. It is the convolution engine for the software called Libra. It's an impulse response mixer, so you can take up to eight IRs and load into the software and by simply moving a point inside a polygon, you can decide which IR has the major impact over the others, so it's like mixing up to eight different IRs in a graphical way.

This is not NadIR? It's something newer?

F: Let's say it's the big brother. Same convolution engine but extended to support up to eight IRs. It's based on NadIR. For example, if you got four IRs, you get a square on the screen and can move the controller anywhere inside that square and the distance between the vertexes changes the influence of every source in the final sound.

The ProF.E.T. will also come as a physical pedal, so you've sort of gone full circle now. You originally got into it modeling tubes, and now you have used your software to create a solid state pedal...

C: This time we worked with JFETs and it was something absolutely new for us. We worked with tubes and software and now we're doing solid state so yes, I guess we can call that a full circle for us.

I think we will have it ready for production a few months after NAMM. Q1 of this year possibly. The circuit is loosely based on the Emissary. What we really want to show our competence—be it tubes, software or solid state—whatever it is. We know how to shape waveforms and get the tone we want, and that people want, hopefully.

Will you manufacture the amps and pedal in Italy?

F: We outsource very little. We like to do everything by ourselves.

C: Everything is hand built. I build everything on my own, from the bare chassis to the final product. I get the metal bent to shape in a shop, but then I drill it and do it all on my own. Everything. And it will be the same case for the ProF.E.T. pedal.

We take great pride in how we build stuff. Italian craftsmanship is known in the world, and it would be really nice to be a part of that, and to show what Italy can offer in terms of a high end, high class manufacturing. We hope to be up to the task.

So, if you are at NAMM this year please drop by Booth 19200 and check out all the things Ignite Amps is doing.