Muse Research is proud... maybe that's the wrong word... okay... Muse Research is intrigued to present to you a view of the inner-workings of arguably the most intriguing (there's that word again) plug-in developer on the planet... Ohm Force. Not only do these guys make amazing plug-ins, you can tell from this interview that these guys are every bit as unusual and interesting as the software they develop. So with no further ado, we present to you the founders of Ohm Force.

The obligatory boring question: what is your background and what inspired you to start a company to create VST software? 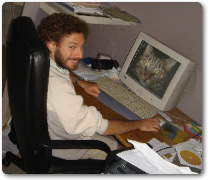 Plum Force : I started to get interested in computers and music quite early. After some "music programming" on the Amstrad CPC, I developed my first serious music software on Atari Falcon 030 and it was kinda successful – I know people still using it. As a musician, I wasn't satisfied with the existing software and wanted to build something related to my needs. After having gained skill in audio development (mostly self-taught, but I learnt a bit in my engineering school), we founded Ohm Force with a few friends in order to develop some new effects. 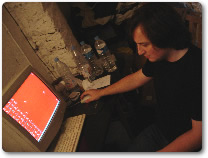 Red Force : Although my first skill (since I am five) is mostly graphical (I draw comic books in my other life), I have been in love with music for a while and have spent a lot of time with Laurent/Plum doing wicked things, both in a live band and with all the software he has developed.

I've been a computer freak since I was a kid and that's how we hooked up at school. After higher studies (Art for me) when Laurent told me he wanted to create a company, I wanted to be in on that immediately. My recent education in art history had shown me the intimate relation between art, tools, and the creative way of thinking, and I thought it would be fascinating for me to work on both fronts. 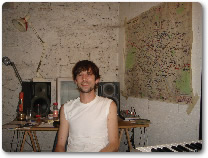 Mauve Force : I studied software development at school. My primary goal was just to create a cool project with a bunch of friends (and one fiend, mouahahah).

(Red Force replies speaking: guess who it is??).

Did you work for another company before starting your company? What are your thoughts about starting a company? Do you have any advice for people who might want to follow in your footsteps?

Plum Force : I jumped directly into Ohm Force after my studies, because it was the best means to do something interesting with people I like, and to keep control over what I'm doing. There was a kind of "let's kick these big corporations where it hurts" spirit, too. Starting and maintaining your own company is sometimes difficult – don't do it for the money – but very rewarding. We always cared about keeping our independence and having good relationships with each other, I think those are vital choices.

Red Force : I've had several freelance jobs before and during my Ohm life but nothing serious. I am with Laurent on this, starting a company is really more about choosing independence rather than making a lot of money. It doesn't mean you won't make a living, and it's even possible (although rare) to make a good living out of it, but mostly it's a matter of doing it just for the sake of it. I have some more specific, better advice on this but I won't divulge them here, as they are already way too many good competitors in this market! :P. 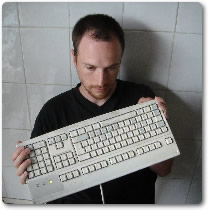 Mauve Force : Ohm Force is my first company, although I had offers to get into another one, a corporate one, which I turned down. What I have learned from doing Ohm Force is the importance of the relationships. We are really a number of associates and it is a real challenge to fit everything together with one another. Also, we are a very narrowly focused team, with plenty of developers, not enough PR / Marcom / Marketing guys and so on. The most important advice I can give is that you need a strong will and the ability to stop sometimes and ask if you can do things in a better way.

If your company made cars instead of software, who would you want to be?

Plum Force : If my company made cars, I would be the saboteur (I see cars as weapons of mass destruction).

Mauve Force : I'd want to be the crash test dummy.

Okay, obviously that wasn't the right question to ask. On to the next: What made you decide to support Receptor? What are your thoughts about the product?

Red Force : To me Receptor is a shot in the right direction in a market that shoots a bit in every direction...

We can now say that software audio technology has earned its place in the studio, but this not the only way we want our stuff to be used. Live performance still is the main thing to me and for live use Receptor is the perfect solution. First, it can be used on stage without a screen.

This is a massively underrated point to me. Did you ever notice when you speak to someone watching his computer's screen (even with a laptop) how it doesn't feel like the person is really with you? (if you still wonder, ask your girlfriend / boyfriend / family or pet).

I still see bands paying for expensive synth modules and expanders that are in no way as good as a small PC with a good rompler, simply because it's a "stage item". Receptor bridges this gap, and with just one push of a button your making music - and of course it's rackable as well.

Now I am not saying that Receptor will eliminate replace laptops, I am just saying that for a lot of people Receptor is the best solution over a laptop or a big workstation. We have been marketed to intensively for years to think that a computer is a "do it all" solution, but this is a completely artificial idea. Computer technology can be customized way more than the average Mac OS X or Win XP user may think. Receptor is based on its own custom OS build of Linux, and the engine itself is designed with only one goal in mind: "running plug-ins for live music". Sure the differences are subtle, but once you get past the "feature list" mindset and enter the "harsh reality of daily life", Receptor's fast boot, 100% clean and bug-free drivers, reasonably low-noise fans, easy accessibility for whatever you need to connect to it makes all the difference. Everyone should at least try it to realize fully the potential of Receptor, in my humble opinion.

Ivory Force: It's great solution for live use, and the ability to have 96kHz as a standard configuration, as well as the UniWire audio network concept is impressive to me. The product is really good and gets better each time a software updated is released.

What do you think about the current situation with piracy, and what needs to happen to stop it? If you ever met a person who admitted that they stole your software, what would you do to them?

Red Force : The current situation is very odd. On one side there are way too many cracks out there, but on the other hand, product pricing and real demand are largely distorted due to the fact that pros need something that "makes the difference"... but at the same time every hobbyist wants "what the pros use". So what happens is that pro stuff is more and more complicated (in a way that probably doesn't even help the professional), seemingly to make sure that only people who have paid big and that are likely to spend the time necessary to learn it will use the product for real. I don't think we can stop piracy, perhaps we shouldn't spend time trying to stop it. What we need to do is just to have more and more people buy the product in the first place. That depends on attractive pricing, good communication and customer support... Also possibly Receptor can help with piracy since it attracts new customers to plug-in software, and makes it easy for them to buy the software they use.

Plum Force : I'm the black sheep on this topic. For me,"piracy"is more a question about intellectual property laws and about our economic system. In my opinion, we should focus on finding alternative ways to produce new, unprotected programs, instead of trying to enforce inadequate laws on old software.

Mauve Force : What would we do if we met someone who stole our software? It has already happened. Some guy said once: "I am a cracker and I don't usually contact the companies who make the software, but in your case I just want to thank you for making such great plug-ins". What do you do when something like that happens? All you can do is laugh. What else can you do?

I'm sorry to have to do this, but I HAVE to know. If you were being sent away on a long trip with just a CD player and room for five CDs, what would they be?

Mauve Force : LOL! Greg's private joke is that I am the only one to answer:

(Red Force speaking: this is by far the "rockiest" playlist you could get from an Ohmie...).

Ivory Force: He's not the only one:

What is the favorite product you make (or have ever made), and why?

Plum Force : It's a difficult question because I would tend to think it's always the latest one. But the plug-in I use the most regularly is probably Predatohm.

Red Force : Symptohm:Melohman. Its the most unique thing we've ever done, the best funky skin (or at least the scariest one) and it's the one synth I can use and use and use on every track (ok, if I got enough CPU...).

Ivory Force: Ohmboyz and Quad Frohmage. Oymboyz is kinda the definitive delay, the Quad is the filter I dreamed of feature-wise.

Mauve Force: OhmBoyz, because Franck has made a very cute tutorial for it, and so at least I understand a bit one of our plugins... ; (.

If people could understand just one thing about your company and its products, what would that be?

Plum Force : Hopefully people can understand more! Anyway, if I try to answer your question,"quality" comes to my mind, but I am not sure it is a good answer. No, the question is too weird. Are you from the marketing department?

Which do you like more, cats or dogs? Why? Do you own any, and if so, what are their names?

Ivory Force: I prefer cats. I have one, a cat called June.

Plum Force : I prefer cats, for errr... their taste! I haven't any animals at home, except bugs maybe.

What is the one question you wish I had asked, but didn't? (and please answer it!).

Mauve Force : In two words, describe in your opinion what is the best about each ohmen? 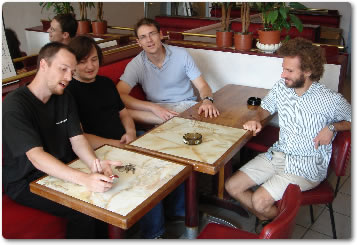 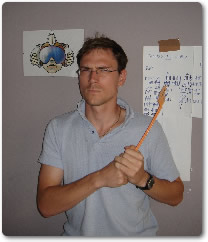 Yellow Force. Don't Mess with him.

You can learn more about the Ohm Force's product range at www.ohmforce.com