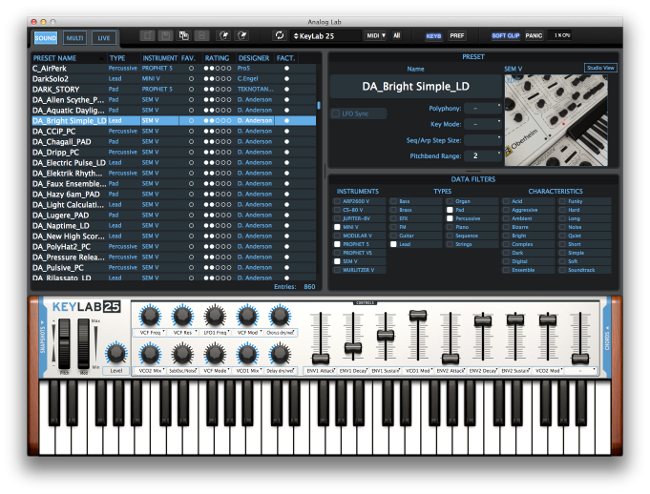 Analog Lab offers the ability to do fast and simple editing and customizing of your presets, but it doesn't stop there. Owners of the original individual synthesizer software products or V Collection can open one of those sounds in Analog Lab and edit it in the original software, and then add it to their library.

Our new Multi mode allows you to create amazing layers and splits and then shape, warp and twist them with 17 high-quality effects. Analog Lab will take your sound and workflow to a new level.

Analog Lab offers the ability to do fast and simple editing and customizing of your presets, but it doesn't stop there. Owners of the original individual synthesizer software products or V Collection can open one of those sounds in Analog Lab and edit it in the original software, and then add it to their library. Analog Lab will take your sound and workflow to a new level.

When you need high-quality synthesizer or electronic keyboard sounds that you can tweak in-depth and combine, Analog Lab is the go-to solution.

This is actually a review of the Arturia V Collection 7 and not Analog Lab. I tried to upload it as a V Collection review but wasn't able to. Also, I had written far too much, so i've only included the overall description of how I found the collection and not the individual instruments.

A year ago, I was approached by someone at Arturia to review some of their software. Stupidly, I chose the V Collection 7, comprising of 25 instruments in various categories. Acoustic piano, electric organ's/piano's/string machines as well as analogue and digital synth emulations. All instruments are classics, with many of them being rare or very expensive to maintain. The analog instruments are exceptionally well done as far as physical modelling goes. The digital instruments are pretty much exactly the same, although it's difficult to properly know without doing an A/B comparison.

When I say stupid, I don't mean the collection is stupid, far from it. It's very advanced and has enormous sound design potential, so much so, that after a full year of use, I feel as if I have barely scratched the surface of what it can do. What I mean by "stupid" is, that there is so much to review that it's almost a forboding task.

It's easy to be overwhelmed by the sheer amount of instruments on offer but Arturia have foreseen this and have developed a comprehensive tutorial for each one. It's certainly worth working your way through them, if only to familiarise yourself with what's on offer. Mastering any instrument, will take time and effort.

For instruments like the Arp 2600 V, the Buchla V, the Matrix 24 V, the modular V, the Synclavier and the Synthi V, I found this invaluable, as they work in a way foreign to me, but thanks to the benefits of computer screens and a lot of clever programming, much of the V Collection is easy to comprehend. For anything that isn't covered in the tutorials, Arturia have provided e-manuals for each instrument plus there are a myriad of youtube vids covering everything you'd like to know and a whole lot more. So, if you're going to take the plunge, you may as well learn deep, as you'll be rewarded with some very interesting and original sounds at the end.

Aside from the included instruments, one other thing I have found incredibly useful is Arturia's controller template system. I have an M-Audio Oxygen 8 keyboard controller. It's a pig to program and only has 8 onboard templates but with Arturia's guiding hand, it has increased my ability to interact with each instrument, and given me unlimited templates, all within easy reach. Sure this works better with more modern controllers but I feel it has breathed new life into my old technology. Furthermore, their "midi control centre" makes this process even easier. Thank you Arturia.

Within the past 2 weeks, i've managed to borrow an Arturia Keylab 49 keyboard controller, which integrates even tighter with the software and more so again with Analog Lab 4, which is a more basic version of everything in the collection, containing thousands of expertly programmed presets from all the included instruments, each with controller assignments that allow some sound manipulation.

After playing with the V collection on and off for the past year, I think that perhaps I need to learn to play the keyboard better as even though my music is mostly electronic weirdness, i'm obviously missing out on the more conventional tones and the V collection provides these and to my ears, they're all top notch.

If you're looking for a package that does just about everything, then this software is for you. There is so much of it that you can get lost for years, yet, with a bit of know-how it can emulate sounds from your favourite recordings almost exactly, as well as make sounds you've yet to hear. There are countless presets to be found in the collection which you'll instantly recognise and they're honed to within a millimeter of the original. This, of course, is testament to Arturia some great sound designers but also to the tools provided by Arturia. There's a lot of skill gone into coding these instruments and it can be heard quite clearly throughout each and every one. It seems almost impossible to believe that the majority of instruments employ NO SAMPLES WHATSOEVER, which makes for a far more expressive piano/organ/whatever than any sampler i've yet to hear.

It's not that I hate sample packs but I really don't need them in what I do. They slow down your computer as well as fill up hard drives unnecessarily and they're not nearly so malleable as their physically modelled cousins, plus not having a mass of weighty samples on your computer is very liberating. Add to this Arturia's skill at taking the instruments further than the originals, such as adding more capable envelopes/modulations/effects, all of which take it to another level, then you have to agree that what is on offer here is far better than the major libraries (Kontakt/Halion etc).

As for its bad points, well there really aren't that many. I suppose 499 euros is a hefty price to pay but when you understand what you're getting, it's actually very fairly priced.

Furthermore, you need to understand just how forward thinking Arturia are as a company. You may wish to wait until the V collection 8 hits the shelves. It would appear that this is a company that doesn't rest on its reputation but instead, prefers to push ahead in directions you never knew were necessary and over the years, they've blurred the lines between "normal" and "fucking right out there", so I expect the next iteration will be just as brilliant. I almost can't wait to hear what they do next, except for the fact that i've barely touched on the tools that are already at hand.

One thing I would like to see in a future upgrade is for Arturia to offer every aspect of every synth as a eurorack style module, allowing everything in the collection to interact more easily and hopefully, by then, i'll have turned my head more towards the modular approach.