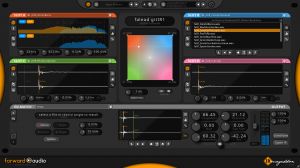 faIRmageddon is the ultimate Guitar Cabinet Impulse Response Designer for the growing needs of guitar players of the 21st century. It's carefully designed to give you what every guitarist and audio engineer dreams of: Your own UNIQUE sound.

With faIRmageddon you'll be able to load, combine, adjust, merge & manipulate your IRs to achieve this goal with ease. You'll love how this plug-in will change your perception of guitar sound forever.

Used the time during this Covid crisis and compared some IR loaders on my system.

faIRmageddon is an IR loader/designer being able to mix up to 5 (4 main + 1 reference; consolidation makes this up to infinity) IRs simulatenously including phasealignment and sample rate conversion which makes it the fastest and stress-free to set up. Besides the sound shaping options per mono/stereo slot (like hp/lp filter, delay, panning, tilt) it offers even more for the complete IR, including eq matching. The factory content includes 2 of their own IR packs (modern rock, post grunge) and a collection of vallhallir files.

It runs rock solid on my windows system. The CPU consumption during playback is slightly higher than with other IR loaders, but you can decide to run in mono or stereo mode which can half the consumption. When tweaking its settings faIRmageddon can produce some additional overhead. It may also depend on your buffer size but I was able to record with it being on a track. The dev already wrote they're looking into it and will optimize it further.

Soundwise in default it produces the same sound as others. The frequency shaping options don't seem to mess up the phase either. I really dig the tilting feature, making it possible to quickly balance the IR in the context of others. Mixing IRs is so comfortable done via a x-y positioning grid, which they already used in their awesome faGuitarAlign plugin.

Bite, Resonance and Air are EQ settings in the final section, targeting certain useful and important parts of the spectrum. Cab size seems to do something similar to pitch shifting, mimiking different sized cabs. Eventually mix & stereo widening can be applied too.
Exporting the IR to a new file is as easy as clicking the export button. The other IR loaders were able to read those files. Though in between I forgot I had the stereo mode enabled resulting in a stereo IR and that lead to errors loading them in other products.

Only the automatic gain compensation is something that created trouble and artefacts here. Simply disabling it, resolved it. Please take a look into it again because I see why it is an important feature and faIRmageddon was the only one having it if I saw correctly.

The interface is fully resizable, thus I had no problems running it on my 4k display. Though I think it can be somewhat tiny when using it on laptops. I really like the visual feedback about what is going on. May it be panning, delaying, filtering and even the positioning of the individual IRs is shown in the output display.

I experienced the company to react quickly when requesting features, resolving bugs or needing support. Some of this plugins features were even based on the wishes of all participants during the early access phase.

In conclusion I do not think it replaces a simple straight forward one slot convolution plugin yet, but is a perfect addition for designing (even stereo) IRs. Please tweak some CPU consumption, add more stuff that makes an static IR come to life and I'm sure it will! Then it will also be a perfect 5/5 score, now it is a very good 4.

Keep up the good work.

The installation went pretty smooth. I appreciate having the 2 free packs and an IR selection of VallhallIR as factory content. Minor thing: there are no presets but those often are a first step into understanding a plugin. Just add some (maybe show how some of the free IRs were made or show something uniquely to this plugin).

I immediately was surprised positively how straight forward the interface is. No uneseccary bling bling or glossy 3D models but pure information what's going on. It offers full control over the sound in a "What you see is what you get" approach, means each controls action is directly visible in a display or waveform. And there are many controls to shape the sound. Besides simple low/highpass the tilt is a neat feature; never saw bending but turned out with interesting effects; same for simply delaying in the stereo field.

The loaded IRs got sample rate converted and phase aligned automatically which already makes this plugin worth having installed imo. Latency and length is adjustable on the system page (which btw shows a whole bunch of useful extra information).
Mixing up to 4 IRs with the x y pad was an easy task. Usually I only was mixing 2 IRs but having the option to just add some more worked out well and helped getting better results easily.

I'm not sure what this compare section is about. It's a whole subsection but effectively has 2 controls. Okay comparing your mixed IR to something else is one application but why is it then copied to a slot when consolidating? It's not clear to me what purpose this section has or even if it is already finished tbh.

But my biggest issue: I can't scroll inside the browsers. That + the view mode that lists all IRs in a folder and subfolders is not a good combination cause navigation relys soley on 2 buttons. That's a pita.

Some minor things I'd wish for: help texts or tooltips. Needing to read the manual to figure out what some buttons do is not optimal. A small tooltip at least saying the name of the control would already help much. Also an option to change the signal flow could be an idea. Like putting the EQ match as last step or first apply the output options and then compare it to something.

In conclusion I don't think it's a game changer but that doesn't make it less interesting. It definitely has unique features and I like the full control over the sound as well as the WYSIWYG approach. But it needs refinements in workflow and more clearing things up. Furthermore the price and its transparency need a rethink or otherwise pump that plugin full with features to make it really worth it. I feel like I already like it more than some other solutions that's why it still ended up getting 4 out of 5 points. Of course going to edit it if problems occur during further testing.

Not only a very good guitar IR-cab-loader, but much more also a very flexible, highly professional IR mixing and editing plugin.

Apart from a lot of other advanced options (like eq-matching) I personally like most the unique mixing, tweaking and editing options, you get here.

You can edit and modify not only single IR's but additionally also your adjusted mix. The graphic displays allow direct comparison between the original files and the modifications.

You want more bass, or less, more bite, or less, a more balanced or a rougher sound, increase the cabinet size or reduce it, ... no problem. Best of all, you can combine your mix in a single file or even export it as a completely new IR .wav file.

Very useful, as sometimes even good IR's don't work equally well with different amp sims. Now you can exactly fine tune them, to optimize the results or combine some not so good sounding ones to a new, probably better sounding or at least optimized, individual one.

Because of the many features reading the manual is recommended.

I thought I was not going to need it because I bought Libra from STLTones right before I knew of IRmageddon. Similar concept but still very different.

The ultimate feature is the automatic phase alignment for each of the 4 slots and the report of it to the host! I'm not aware of any other IR loading plugin doing that. But that makes mixing IRs work like a charme and makes guitar clips stay in correct timing. Another thing to mention are the various options to transform the sound on time or spectral base, may it be individual or on the master, and their visual feedback. Libra has 8 slots to work with but I think the "consolidate" feature in IRmageddon (which renders the mixed IRs into a new slot) is a good replacement for the 4 "missing" ones.

As I became aware of IRmageddon the free early access phase has begun. Right from the start the developer made clear it's a community project. We got asked for opinions, had polls about features and even a to-do list on Trello as I later saw. The handling and export of stereo files were such features or the dry/wet mix I think. Since then it continously got improved and bugs got fixed pretty fast, making it not just another IR loader.

Why I only gave 4 stars: the CPU consumption can be improved some more I think and with some settings the UI feels sluggish. Other than that I think only the filebrowser could need some more love because I think in any IR plugin the library and handling of it is the most important part.