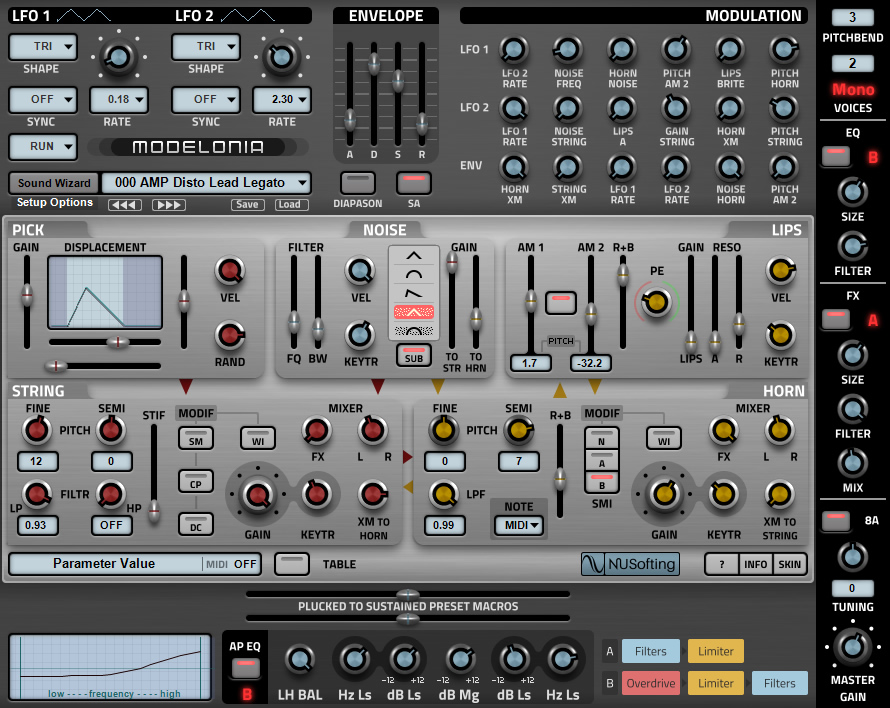 Modelonia is a novel physical-modelling synthesizer which uses a hybrid of two distinct model 'types' - a plucked-string model and a blown-bore (i.e. trumpet-type) model. Each model may be used simultaneously, and the signal path allows cross-modulation between the two models for more interesting and complex tones.

Modelonia is not simply an emulation of acoustic instruments; advanced physical modeling has been used to enable the creation of lively and expressive new sounds and harmonic textures. The interface has been designed to be as easy and helpful as possible for newcomers to this synthesis technology, without compromising Modelonia's sound design capabilities.

Modelonia is one of the best that there is. A bit limited but it sounds totally unique and worthy of listening to.

If you are looking for a VST instrument that can produce very playable and unique blown and plucked sounds but also had a low CPU hit Modelonia is the perfect instrument for the task. Modelonia has an orchestral/score vibe to it and it comes with a large library of sounds to get you started and there is plenty of control and modulation to play with to get even more interesting things happening, i found myself inspired and easily coming up with melodies with this plugin and i can see it playing a major part in a lot of my productions. For £53.00 Modelonia is worth every penny, a big plus for me is that there is none of this off putting intrusive jumping through hoops internet connection needed business before you start to use the software that you have just paid for (Some developers need to realize that the vast majority of us producers are good, honest hard working folk and keep their copy protection scheme simple and pain free - rant over!) the support from the NUSofting developer has been very responsive and helpful when i asked for advice and as long as NUSofting stays in business they will also have my support as a customer.

I'm having to give Modelonia a 10, because of what it can do and what it makes one do. Physical modeling is a sensitive technology and Modelonia is quite daring with what sound modification options it offers to the sound designer. Luckily it appears to have a built-in limiter, so at least your ears and gear won't shatter, giving you the chance to explore sounds of an absolutely unique nature. It produces virtually living sounds that I've never quite heard before, but that can be played so naturally and end up sounding so rich that I just have to consider it a must-have for truly musical musicians, but also the wilder kind.

Though you can create beautiful hammered instruments of the stringed variety and beyond, my favorite power of it lies within lead instruments of the blown kind. Again, I've never quite heard anything like it, but immediately fell in love with it. If you want to break out of any mold, this is a gem to do so.

6 0
In a world inundated with Virtual Analog its refreshing to find a developer who's actually trying to invent new things rather than make carbon copies of the old stuff. I mean how many "phat" bass synths does anyone need ?
Modelonia is a gorgeous looking and sounding Vsti that tries to do something a little different.

USER INTERFACE
One of its many strong points, not flashy but very pleasing to the eye. Takes a bit of getting used to at first because its not laid out in the usual subtractive VA stylee.
But once you get your head round what Modelonia actually does the controls start to make sense and the interface reveals its charming clarity. Pretty much everything is midi learn-able at a mouse click and if you get lost theres a ? button which explains the layout.

SOUND
Its an acoustic modeling hybrid that combines string and a horn models in interesting ways to produce a wide range of very organic non electronic sounds. Its got a weirdly baroque nature that kinda sounds like Kraftwerk in renaissance Rome (that may not be historically accurate but you get my drift). You can make fairly convincing string and horn sounds if you want to but i've had hours of fun making mad, lively, organic sounds just messing around playing my midi guitar with CC footpedals controlling parameters in real time.
I compared it to Reaktors Steampipe , and although they are slightly similar Modelonia has a much wider range of possibilities and doesn't rely as heavily on huge reverbs to make it sound good ( although it does have one that comes in handy )

FEATURES
Its no jack of all trades, thank god. Modelonia does something slightly different and it does it really well.

DOCUMENTATION
Its there built into the skin if you need it , but you hardly do because its so much fun to just play with and find out for yourself.

CUSTOMER SUPPORT
Nusofting is about the right size for this kind of thing so support is personal and quick ( not that i've needed it ). Luigi and Paul are both good chaps of the highest order.

VALUE FOR MONEY
Recently discounted so a total bargain.

STABILTY
solid as a rock