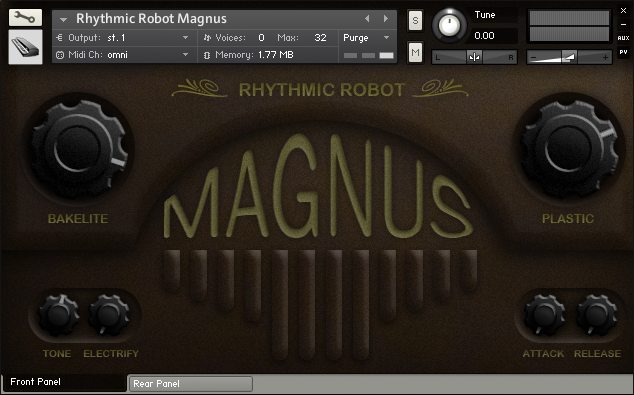 What is it?
Reed OrganColour OrganDrawbar OrganFunky OrganKontakt InstrumentMagnusOrganRhythmic Robot
Format(s)
Operating System Availability
Audio Demos
Magnus Swamp Demo
License & Installation Method
Voucher / Code for redemption on other website
Tell Me More
Important Note
Requires a FULL version of Native Instruments Kontakt version 4.2.3 or higher (all versions of Kontakt 5 supported). Kontakt Player is NOT recommended and will time out after 15 mins or so. PLEASE MAKE SURE YOU HAVE A FULL VERSION OF KONTAKT BEFORE BUYING, AS WE CAN'T GIVE REFUNDS FOR SOFTWARE BOUGHT IN ERROR!
For related news items, downloads and more please see the full KVR product page for
Magnus

Magnus allows the user to blend the "Bakelite" and "Plastic" samples to taste via the front panel controls, and adds Tone and "Electrify" -- which brings in tube harmonic distortion to the sound. Attack and Release controls are available for the amplitude envelope, and longer release times invoke a slight pitch drop-off as the sound decays, which mimics the behaviour of a real reed organ having its keys very slowly let up (air pressure through the reeds drops, and the pitch falls as a result). Stereo spread, chorus and phaser effects are available on the rear panel.

In My Cart!ShelTone Suitcase
Reed Organ by Rhythmic Robot$9.00