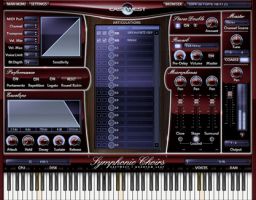 What is it?
Symphonic ChoirChoirEastWestOrchestralSymphonicSymphonic Choirs Bundle PlatinumVoices
This product is "Powered By" Play. The OS and Format icons listed below should be accurate for the latest version of Play.
Format(s)
Operating System Availability
License & Installation Method
Voucher / Code for redemption on other website
What does this mean?
For related news items, downloads and more please see the full KVR product page for
Symphonic Choirs Bundle Platinum

Imagine typing words into your computer, in any language, and hearing a world class Symphonic Choir sing those words in any key(s) you play "live" on your keyboard controller! Well imagine no more, that's exactly what this revolutionary "award-winning" virtual instrument does.

In addition, the Platinum edition (Gold edition has one mic position and is 16-bit) is the first 24-bit Choir virtual instrument to include three simultaneous stereo mic setups (close, stage and hall), so users can mix any combination of mic positions to control ambience. The Choirs were recorded in the same concert hall, by the same team as the EastWest/Quantum Leap Symphonic Orchestra and blend perfectly with EWQLSO.

To achieve the feel of a live concert hall performance, each instrument and section was recorded with three mic positions: close, stage (conductor's position) and hall. By selecting different mic positions, users can mix these sounds together to create any kind of natural ambience their project requires. This eliminates the need for artificial reverb.

The Symphonic Choirs Expansion (Voices of the Apocalypse content) was recorded separately, at 24-bit resolution with a single mic position.