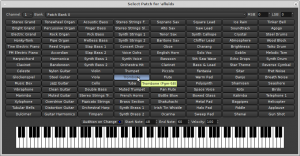 Ardour has been updated to v5.12. Much of the work in this release was sponsored by Harrison Consoles.

Two of the most notable new features are the improvements in functionality to the new session and new track/bus dialogs, which now offer much easier and more powerful ways to use templates. These include dynamic "track wizard" templates that allow you to interactively setup sessions and/or groups of new track/busses very quickly and very easily. This builds on the new template manager dialog introduced in 5.11, and a new less obvious feature: the ability to create dynamic templates with Lua scripts.

Also notable is the new patch selection dialog for MIDI tracks/instruments, which provides an easy and convenient way to preview patches in software and hardware instruments. Naturally, it integrates fully with Ardour's support for MIDNAM (patch definition files), so you will named programs/patches for both General MIDI synths and those with MIDNAM files.