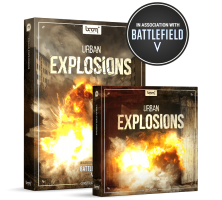 BOOM Library has released the Urban Explosions collection. For the recordings, they teamed up with the sound department of EA DICE (known for the Battlefield series, Star Wars Battlefront, Mirror's Edge) and created what they say is the biggest explosion sound FX library ever. EA DICE uses the recordings heavily in Battlefield V and now you can get the recordings and their ready-to-use designed sounds in stereo and 5.1 surround for your own projects.