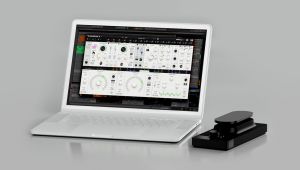 For the first time, music hardware and software company Expressive E has released a free synthesizer preset pack that does not require one of its Touché or Touché SE controllers. This new 20-preset collection harnesses the advanced sound-design capabilities of Massive X, Native Instruments' wavetable software synthesizer, and offers users "the next level in articulate playability".

The deep modular nature of Massive X lets its users interact with its sounds much more expressively than on traditional subtractive synthesizers, making it a great candidate for the sound design talents of Expressive E's team. Their free presets utilize Massive X's sophisticated programming, so users can immediately shape the sounds in creative ways with the turn of a single control. Even after the initial sound stops—for instance with short pluck or bell sounds—that single control continues to put out volume and timbre changes with no need to retrigger the note.

Owners of an Expressive E Touché or Touché SE controller will have an even more precise and very tactile experience with these sounds. The devices' four-axis control surface offers the highest degree of touch and pressure sensitivity for both the most subtle and the most aggressive parameter changes.

While anyone can open these free presets directly in Massive X, Touché and Touché SE owners can open them in Expressive E's Lié plugin host software. This allows the user to manipulate up to eight of Massive X's macros at once with a single hand, making rhythmic manipulation of the sounds much more varied and physically intuitive. Each of those Massive X macro controls manipulate multiple parameters, making these synth sounds dynamic when used the Touché or Touché SE.

Touché and Touché SE hardware ships with more than 200 sounds powered by UVI Workstation software. These sounds are custom-designed to complement the controllers' four-directional movements. Lié also includes presets for more than 30 popular software and hardware synthesizers from brands such as Arturia, Korg, Moog, Novation, Roland, U-he, and others.

These free Massive X presets are Expressive E's latest sound design effort, but by no means the last. They are available now, along with the Touché ($399) and Touché SE ($229), at expressivee.com/massive-x