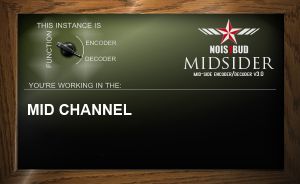 Noisebud's plugin MidSider will make it possible to use any plugin in mid/side mode and with the latest update, you'll be able to process only the left or the right channel too.

They also made two other plugins available that earlier were strictly for Patreon users. First, the plugin NoLias will help you find plugins causing aliasing distortion in an effect chain. And second, Buhdist, a classic distortion plugin initially made to create hard-hitting kicks in techno but it works for other distortion duties too.