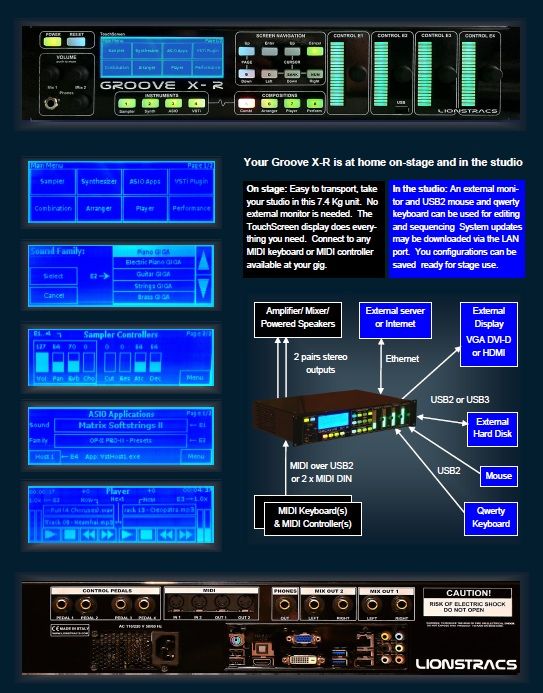 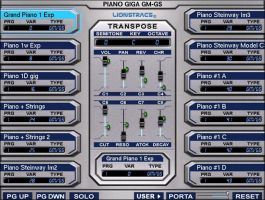 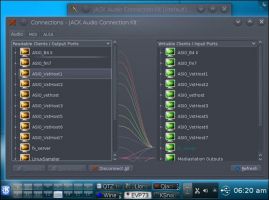 Lionstracs and distributor Corcyra Global are now shipping the long anticipated Groove X-R hardware sampler and plug-in host workstation-in-a-rack to customers who pre-ordered. It retails at €1,850 (plus shipping from Italy at cost) plus applicable purchase taxes.

Unique features include the ability to add the user's favorite sampled sounds to a factory library of over 20 GB sounds, and to mix and layer these sampled sounds together with sounds and effects from the musician's own plug-ins. Up to 10 layers may be created in a Combi, and the unit offers over 512 notes of stereo polyphony.

The Groove X-R ships with the fully licensed version of the popular Sonic Projects OP-X Pro II plug-in. Also, Lionstracs, Corcyra Global and XT Software have formed a new partnership in which the Energy XT audio and MIDI sequencer is integrated within the Groove X-R and will be onward developed in a close collaboration between the respective companies. A license fee of €59 is payable for those who wish to use the full editing capabilities of Energy XT. Existing Energy XT customers will be able to use their existing license on the Groove X-R.

A new Groove X-R section on the KVR forums has opened to coincide with the official release of Groove X-R units to customers.

Sonic Projects OP-X Pro II
The full licensed version of the Sonic Projects OP-X Pro II synthesizer is included as standard. There is an included library of more than 1500 OP-X Pro II presets including many of the most famous '80s-hits sounds and well-known presets from vintage synths. These are fully integrated into the Lionstracs menu system and are available as named patches for inclusion into Combis and for selection in Energy XT. Arp mode is included so you can easily build syncopated synth backings for your performances.

Groove Sampler
Groove Sampler plays samples direct from hard disk via a dynamically managed RAM buffer. You can issue MIDI Program Changes in the middle of a song, and the appropriate samples will be dynamically loaded in just a few milliseconds. Or if you are using a MIDI sequence that can't wait that long between notes, you can preload a set of sounds to make them PERSISTENT before playing the MIDI sequence.

The Groove OS screen navigation system displays 12 sounds per page on an external monitor, with an unlimited number of pages. There is a complete GM/GS and XG/XS map of sounds ready to use. You can import your own samples in SF2 and SFZ format, and the Groove Sampler allows you to create your own multi-layered sounds in a User Memory bank of unlimited size, for use on the Groove X-R.

Sequencing & Recording
Energy XT is a slot-based sequencing and recording system, the read-only version provided free and the editable version is available on a license basis issued by XT Software in Norway. MIDI notes and audio clips may be stored in tracks and slotted patterns within tracks. A slot is defined by a start and end bar number. You can have an unlimited number of slots and an unlimited number of tracks in each slot. Each slot can be looped and may be triggered by an external controller. You can put MIDI arpeggio patterns into a slot.

Audio Connection Manager
JACK audio connection manager is an audio patch bay of unlimited size. You can connect and chain one plug-in to another, so that a synth plug-in output can be connected to the input of a guitar amp model or a plug-in effects unit. You can also connect the output from the Linux Sampler to the input of another plug-in, for example providing Leslie speaker emulation. So, if the standard facilities in the Groove X-R are not enough for you, then you can extend its capabilities by loading additional plug-in synthesizers and effects when you need them. Windows based plug-ins run on the Groove X-R using the WinE environment, and they provide a compatibility list of tested plug-ins to all users.

10 Different environments for configuring complex plug-in routings
The Groove X-R runs ten VSTi and ASIO host engine canvasses simultaneously and in each host engine an (almost) unlimited number of plug-ins may be run. The Groove X-R is limited by available RAM and CPU power of course. More than ten OP-X Pro II presets may run simultaneously giving a total of more than 120 voices (12 voices per preset).

Windows-based plug-ins run on the Groove X-R using the WinE environment. The Groove X-R is compatible with the Native Instruments product family.