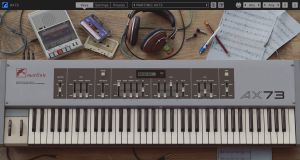 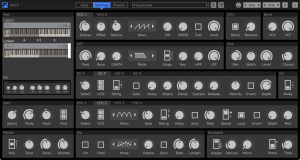 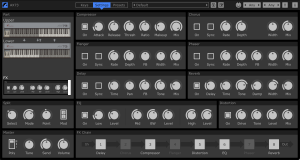 Martinic has announced the availability of the AX73, a component-modeled emulation of an 80s analog synth that flew under the radar. Enhancements include 24-voice polyphony, synth layering modes, an effects section and numerous additions, some inspired by the AX60 and AX80 synths.

For the plugin AX73, the original synth has been emulated and duplicated onto two layers, giving rise to four-oscillator patches in Layer mode, or access to two complete synth setups across the keyboard in Split mode. MIDI mode allows the layers to be played by individual MIDI channels.

Martinic's AX73 features four LFOs and four envelope generators per layer, a global effects section with eight processors, the arpeggiator from the AX60 (one per layer) and the sub oscillator from the AX80. VCOs can be tuned down to the 32' octave as in the AX60 and AX80. There is also a preset browser with tagging and search functionality to manage the synth's 600 presets.

Price: $119. There is an introductory discount of 50% until the end of October, 2021. You can pick up a demo version at the Martinic website.

Find AX73 in the KVR Marketplace

FEATURED
50% Off
AX73Synth (Analogue / Subtractive)
by Martinic  $59.50
Add A Review My KVR
Was $119.00; Save $59.50 until 31 Oct 2021
$59.50Buy
BUYING!XCheckout
The Orchestra Essentials
Orchestra
by Best ServiceReason 12
Virtual Studio
by Reason Studios
Featured
An Introduction to Paragon ST