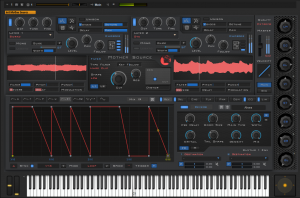 Miclop has announced the release of Mother Source, an advanced instrument for HALion, HALion Sonic and free HALion Sonic SE.

Mother source uses the HALion engine for playing sampled sources from some of the most highly rated analog and virtual synthesizers on the market. These sources have been carefully created to cover a wide sound spectrum, from classic Saw or Sine sounds to elaborate and complex sounds.

The concept is based on the exchange of Sources on the included presets, these sources are designed to generate a new sound on the same preset. Miclop provides 130 sources and more than 200 presets that can generate 26,000 different sounds just by changing the source and that with a single layer activated.

Free version
An LT version without any restrictions is available. The only difference with the paid version is that it has fewer presets and sources.