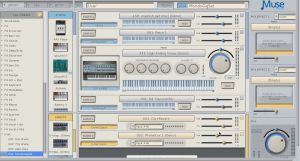 Muse Research and Development has announced a new software upgrade for owners of the RECEPTOR 2 family of hardware plug-in players. This software upgrade provides users with an entirely new "rack mode" interface and brings advanced features previously found only in the new RECEPTOR VIP, TRIO, and QU4TTRO models to the RECEPTOR 2 platform. The upgrade comes with over $900 of plug-ins with hundreds of presets created using the new SoundFinder interface, yet costs only $199.

The upgrade is available now for download from the www.plugorama.com website, and is user-installable in a matter of minutes.

Advanced New Features are now available for your RECEPTOR 2
The recently released RECEPTOR VIP, TRIO, and QU4TTRO included the advanced "Rack Mode" graphical user interface that features the SoundFinder preset organization tool, a drag-n-drop interface for creating new sounds, and the Live Mode interface that dynamically loads presets into RAM as needed while performing live. These new features are now available to RECEPTOR 2 users with the V2.0.1 software upgrade, providing an entirely new way to program and use the device.

The V2.0.1 software update compliments the existing "Mixer Mode" interface found in all Receptor 2s. Simply open up the Setup page, select the Rack Mode interface, and an entirely new universe of possibilities is opened thanks to the advanced new feature set. Take for example the SoundFinder function. This new feature provides you with the ability to organize your presets using "Tags", including the ability to filter the presets across various Tags based on different characteristics. This time-saving function is enhanced by the ability to define your own Tags to organize your presets based on sound or effect type, by recording project, or by the name of an upcoming tour or show.

New LIVE MODE feature makes live performance a breeze
The LIVE MODE feature makes it possible to define a "virtual set list" for use at a show. Simply select the Tag you wish to perform, and the new V2.0.1 software will intelligently load and cache all of the presets for the songs in your setlist within the limits of the available RAM. As you move through your set list, Live Mode will automatically load the presets that are later in the show while unloading the presets that were used earlier in the show. Live Mode also lets you have far more than 128 presets in any particular Tag, giving you access to literally thousands of sounds and effects presets in a single show.

The LIVE MODE also features a "notes" field for adding performance notes like key signatures, chord progressions, lyrics, tempos, and other performance notes that you might want to associate with any particular preset for a song. Simply open up the note pad, type in whatever performance notes are relevant for that song or preset, and whenever that preset is loaded, your notes will appear in the notes field. Not only that, the LIVE MODE feature was designed for easy control from an iPad or Android Tablet using Wi-Fi, letting you control your Receptor even if it is off-stage or otherwise out of reach.

Over $900 of premium plug-ins and presets included with upgrade
To get you going with all the power the SoundFinder and Live Mode features have to offer, the upgrade comes with over $900 of premium plug-ins and presets that are pre-tagged and ready to use. Included is the exclusive MusePlayer soundset powered by the UVI engine, as well as virtual instruments and effects from U-he, Applied Acoustics, ForeFront, Camel Audio, Peavey, WaveArts, MuTech, and others.

Komplete 9 Compatibility and new Backup / Restore functions début in V2.0.1
The new V2.0.1 upgrade also features the ability to install the Native Instruments Komplete 9 and Komplete 9 Ultimate collections of virtual instruments and effects on a Receptor 2. Due to system requirement changes from NI, a Receptor 2 customer is not able to install the newest versions of Komplete, but now with the V2.0.1 software upgrade it is possible to install either of these great packages.

Also new in V2.0.1 is a comprehensive back up and restore function that lets you create a backup of your system drive using compatible USB external storage devices, and if required, actually boot and run off that drive.

Version 2.0.1 software available for download now
The new system software is available for purchase from Muse Research's www.plugorama.com website. Upon purchase, you can download the software upgrade and the requisite plug-ins and presets, and authorize the package using a license key. Once installed, you'll have the option of either the Mixer Mode or the Rack Mode interfaces.