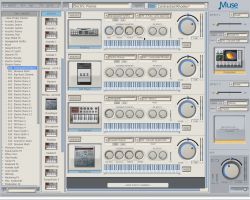 Muse Research and Development has enhanced their RECEPTOR 2+ PRO and PRO MAX models with the release of MuseOS 2.0 software. This entirely new software version features an incredibly simple user-interface that introduces the SoundFinder technology for organizing and navigating presets in the RECEPTOR. SoundFinder was first developed for the MuseBox product which was jointly developed with Peavey Electronics, but unlike MuseBox, the MuseOS 2.0 supports up to 16-channels of synthesizers and audio effects thanks to the processing power of the dual-core processors found in the RECEPTOR 2+ PRO and PRO MAX models. Additionally, the software features enhanced MIDI functionality including full "MIDI learn" capability, as well as other advanced programming and preset functionality to make these models of RECEPTOR better than ever. And since so many artists and theaters use RECEPTOR and have come to rely on its mixer-style interface, MuseOS 2.0 features a "Classic" mode lets you continue to use the legacy interface with its original look and feel.

MuseOS 2.0 makes RECEPTOR 2+ PRO and PRO MAX easier to use than ever
The new user interface sports a simple workflow that starts with the SoundFinder function. SoundFinder lets you group all your presets using "TAGS" that denote the category, character, or source of a sound or effect, as well as letting you create your own custom TAGS to organize sounds into set lists for use at a gig, or for organizing your sounds by project when recording. The convenient drag and drop nature of the interface makes it incredibly easy to organize your sounds and make modifications to your TAGs on the fly.

Central to the new look and feel of the MuseOS 2.0 interface is the "virtual rack", found in the center of the GUI. Simply drag the picture of a virtual instrument or effect into an open "slot" in the rack and you are able to make music instantly. Editing or tweaking your presets is just as easy: simply click on the picture of the plug-in and up pops the interface.

Powerful MIDI filter and MIDI learn features make live performance a breeze Controlling those virtual instruments and effects is also easier than ever thanks to the versatile MIDI Filter (complete with real time MIDI event monitor mode) and a comprehensive MIDI learn feature that works with any MIDI controller or keyboard.

RECEPTOR'S "Classic" interface remains supported, and has also improved
Thousands of leading bands and artists rely on their RECEPTORs, the industry standard for mission-critical music making and effects processing. As a result, many touring artists and theatrical installations might not want to transition immediately to the new user-interface. For those clients, MuseOS 2.0system software features the "Classic" legacy user-interface that existing musicians know and love. But even this classic interface has been upgraded with new "Smart Snapshots" mode that lets you selectively lock or unlock virtual instruments in a Snapshot Bank, letting you move between pre-defined sounds and effects instantly, even when they consist of large sample libraries.

“We're very pleased to offer this massive software update for the RECEPTOR 2+ PRO and PRO MAX models" comments Bryan Lanser, VP of Product Development at Muse Research. “We realize that RECEPTOR is a very powerful product, and by simplifying the user interface we believe that everyone can now take advantage of what it has to offer musicians, whether they play keys, guitar, drums, or engineer and produce records. Its a great step forward in making RECEPTOR as easy to use as it is powerful and reliable.”

ReceptorHardware Host
by Muse Research  $1699+
Add A Review My KVR