With “Tribal Progressive Revolution” sample virtuoso Oliver Schmitt aka Sounds of Revolution offers his sound design skills to "those in search of exclusive instrumentations with a certain flair". 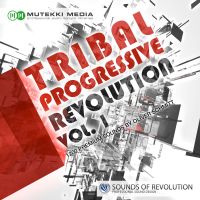 Modern producers can look forward to more than 700 fresh drum, bass and synth loops (all 127 BPM), consisting of a diversity of kick-free loops, constructive loop kits as well as many live recordings with a good portion of dirt. Nothing is left standardized, all sounds and loops have been processed with premium periphery to create sophisticated samples that make your productions stand out.

Furthermore there’s a collection of another 500 significant single sounds such as drums and FX. The sounds of this library are tailored for genres such as deep, tech or progressive house, and also fit in the fields of dub and techno.