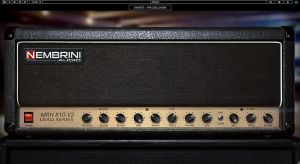 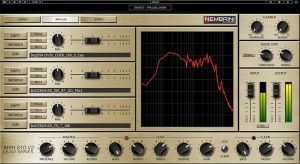 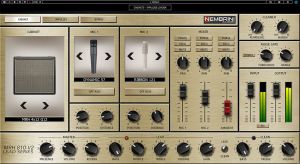 Nembrini Audio has announced the release of the MRH810 V2 Guitar Amplifier, a new Audio Unit, VST plug-in and AAX plug-in for macOS and Windows.

For almost 60 years, stacks of British engineered black and gold have lined the stage behind the greatest artists in the history of guitar driven music.

Whether it was multiple shiny stacks on stage at Wembley or Madison square garden or a lone stack with ripped tolex and a blown speaker on a 10x20ft stage in front of thousand people, the legendary black and gold has been there.

Perhaps the most well known of the amps in this royal family would be the 800.

From classic rock rhythm playing, pure shredding leads, thrash tones that "kill 'em all", sludgy doom and everything in between are all within no more than a few clicks.

The MRH810 V2 Lead Series Guitar Amplifier provides all the versatility of the 800 amp and more in plugin form.

Nembrini Audio has also included a new enhanced recording chain emulation with six selected guitars cabinets which match the high-gain tone of the amplifier. You can select between four different mic emulations with on and off axis position switch and continuous position and distance knobs.

The new Impulse Loader lets you load up to three 3rd-parties impulse responses. You can blend them together using volume, pan, phase, solo and mute controls.

As usual, Nembrini Audio has included a powerful Noise Gate section plus a Cleaner circuit to reduce rambling and harsh.