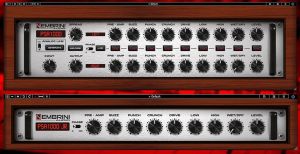 Nembrini Audio has announced the release of PSA1000 Analog Saturation Unit plugin, a modern recreation of a '90s classic analog guitar preamp which is used in recording studios all around the world. It's available for a special introductory price of $29 during April (regular price $127).

PSA1000 is used and "abused" for recording and characterizing not only guitars but also electric pianos, organs, synthesizers, electric basses and many other instruments.

The original unit has found its place even in the mix stage for processing all type of sounds, as drum rooms, percussions, vocals, kicks, snares and sound fx too.

For creating the PSA1000 Analog Saturation Unit plugin, Nembrini Audio has carefully modeled the original analog circuits and finely refined it by ear as all its products.

With the PSA1000 Analog Saturation Unit plugin Nembrini Audio also includes the PSA1000 Jr version which has the exact same distortion algorithm in a simplified interface that include the Dry/Wet knob and Phase Reverse switch to fully take advantage of its potential like famous mixing engineers as Tchad Blake, Dave Pensado, Andrew Scheps, Jacquire King and many others.