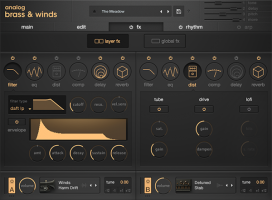 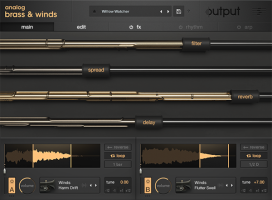 Output has announced the release of Analog Brass & Winds, which is described as "a virtual instrument combining powerful orchestral sounds and legendary synths."

Co-Founder and CEO, Gregg Lehrman, describes the instrument; "If you know Output, you know we love taking something traditional and flipping it on it's head. From Stranger Things to Bon Iver to Future, we're inspired by artists that use Brass and Woodwind sounds in new ways. So we set out to build a VST that pushes it even further - it's part synth, part huge ensemble. It's detuned, manipulated and raw. It doesn't matter if you're a producer, composer or artist... if you like your palette cool and weird, while still being musical, it's for you."

Analog Brass & WindsBrass
by Output  $199
Add A Review My KVR