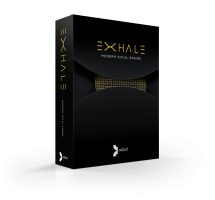 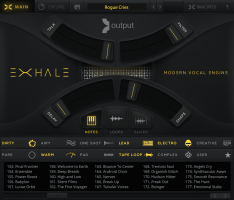 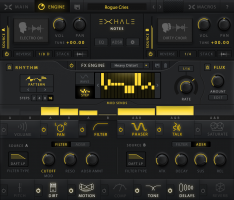 Output has announced the release of Exhale, which they describe as "the first truly modern vocal engine". Exhale is a playable engine built for every composer, producer and artist seeking that cutting-edge sound in today's most creative music.

"As musicians, we've always wanted a vocal instrument that was cool, creative and modern," says Output Founder Gregg Lehrman. "So we decided to build it." To develop Exhale, Output enlisted a huge team of acclaimed record producers, vocalists and sound designers to capture, manipulate and shape the sounds. The result is an instrument that they say pushes creativity to a new level. Adds Lehrman "We provide the starting point, the rest is up to you".

The powerful engine features three distinct modes: Notes for chromatic playing, Loops for looping vocal elements, and Slices for sliced vocal phrases. Quickly find and customize your sound on the Main page using 4 Macro sliders, or dive deep into modulation, mixing and effects on the Engines page. With over 500 presets, many of which include full banks of loops and slices, there's a world of starting points to help you be creative.

Exhale works in the full version of Kontakt and the free Kontakt Player. It costs $199 but is $179 for current Output customers through November 30th.

Exhale is available today at Output.com and authorized Output dealers.

ExhaleVocal Engine
by Output  $199.00
Add A Review My KVR