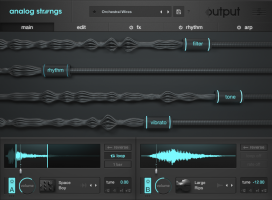 Output has announced the release of Analog Strings, which is described as "a virtual instrument for the modern music maker".

"Analog Strings is a modern take on string production," says Gregg Lehrman, Founder and CEO. "We were meticulous in our sampling but then spent months messing it all up to create something new and different. We're really excited to hear the music it inspires."

Analog StringsString
by Output  $199
Add A Review My KVR