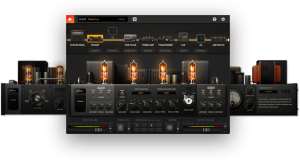 Positive Grid has released BIAS Amp 2, the first major update to their flagship virtual amp designer. BIAS Amp 2 features a component emulation engine that allows users to design their own custom amp from the circuit level, swapping tubes, transformers, tone stacks and more to create a custom amplifier designed specifically for the individual needs of each guitarist.

"BIAS Amp's revolutionary engine has the potential to remove the barrier between guitarists and their ideal tones", said Sean Halley, Director of Product Marketing. "The major updates and new features we've added to BIAS Amp 2 offer a greater level of customization than has previously been possible in the world of digital guitar processing". He continues, "The new features and updates in BIAS Amp 2 - including our partnership with Celestion - have all been developed with an eye on increased dynamics and touch sensitivity, and a more refined and complete tone-making experience."

I've been using the Bias Amp 2 demo software for some time and compared it to Mercuriall's U530, Spark and Amplion. All of these software guitar emulators have pros and cons. One can get a decent sound out of all of them.

In terms of realistic, useful sounds, Bias Amp and U530 both win over Spark and Amplion. In terms of programmability, Bias Amp wins hands down. Why? The sounds can be customised so that any fussy guitar player can dial in exactly the tone he/she wants from super clean to fizzy Fender to American grit and British tones. Amplion and U530 just don't have the tweak-ability as Bias Amp. You get more for your money, so to speak.

However, I still prefer U530's sound overall with my favorite distortion pedal running in the analog chain before going into my D./A converter. It has more punch and realism. Don't get me wrong, in a mix, both the U530 and Bias Amp sound authentic, with the Bias Amp being a bit more Marshall-like than the U530 and Spark, but when listening to the software on its own, one can tell that neither of them are 'real' amps. Although most people probably can't tell the difference, I can. There are certain random and intermittent overtones a real amp played live emits not to mention the air being pushed in your face from 12" guitar speakers moving back and forth. That said, I am happy to use Bias Amp on a CD because I don't have to mic up my amp and fiddle with microphone positioning for hours.

Just to update my previous post. I had ordered a Marshall DSL100H. Because it is on back order, I was bored and took sample sounds from the Marshall amp and dialed in the same sounds with the Bias software. In terms of dynamics, grunt, fizzle and overtones, the Bias amp delivered an almost identical copy of the Marshall DSL. In a mix, the extremely minute differences will not be noticeable. In fact, between the same Marshall DSL amp, there will be minute tonal differences, thanks to the tubes. Also, the minor differences were to Bias's advantage. I could dial out the harsh Marshall fizziness or put more into the tone. You can't do that on the real amp. I therefore cancelled the Marshall amp and ordered a Bias Amp mini.