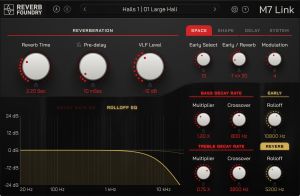 Reverb Foundry has released M7 Link, a comprehensive plug-in capable of complete control via MIDI of Bricasti's M7 and M7M hardware stereo reverb processors, allowing management of settings and presets from within any DAW.

In addition to dedicated controls for every function provided by the hardware units, new features have also been added including Parameter Locks, Tempo Sync for Pre-delay and Delay Time as well as graphic representation of Decay Rate and Rolloff EQs. Extensive library functions are also provided for preset management, including an A/B register feature for quickly auditioning and comparing presets. M7 Link also supports hardware identification via MIDI for multi-device systems.

"Earlier this year when it became clear that the M7 needed an updated control plugin, my first call was to Reverb Foundry", said Casey Dowdell from Bricasti. "Matthew Hill and David Bryce have the ideal competence to develop and release a solution that has already satisfied the beta testers who have reached out to me."