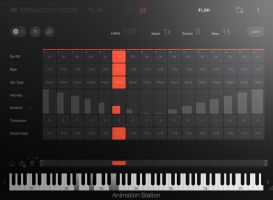 Sample Logic has released Animation Station, a MIDI effect instrument plugin that they describe as "the next step in assisted music creation", with an introductory price of $99.99 (regularly $149.99) until June 29th, 2021.

Play single notes, or chords and let Animation Station take your virtual instruments on a creative ride. Play, edit and even export the MIDI data to use outside of the plugin.

Animation Station is the world's most advanced, and most flexible arpeggiator and so much more... step into the future.