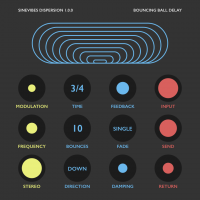 Sinevibes has released Dispersion, a delay modeling effect for Mac. Via a special formula developed at Sinevibes, it configures multiple delay lines so that their times are spread in a non-linear fashion - but always summing up to a defined rhythmical duration. As a result, this delay network sounds like a natural phenomenon, yet with its timing precisely synchronized to the beat. Featuring multiple feedback tail shaping and modulation options, Dispersion is not only capable of doing "bouncing ball delay" effects, but also scattering reflections, shuffle delays, stereo-widening choruses and grainy reverbs.

As always in a Sinevibes product, this plugin includes a color-coded user interface designed to be a clean and simple layout.