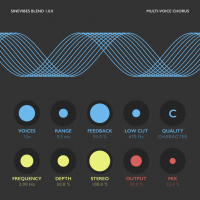 Sinevibes has released Blend Audio Unit plugin for Mac – a multi-voice chorus comprised of up to 16 separate layers. Each layer is actually a chorus effect on its own – complete with a dedicated modulation generator and a feedback loop. Even with all 16 layers activated, Sinevibes say the the resulting mix is dense yet always silky smooth and musical – thanks to clever proportional phase offsets.

Blend also has three different interpolation algorithms, each giving it a slightly different sound character. And as much as it excels at creating delicious chorus and ensemble effects of many, many styles, Blend's unusual flexibility allows it to easily go into much further territory - so effects like vibrato, tape wow, flanger, dissonance – even reverb – are just a few tweaks away.