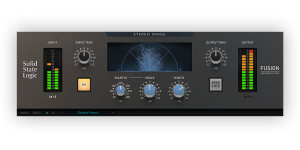 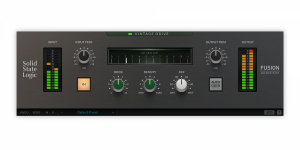 Solid State Logic has announced their new DAW plug-in development program with scheduled monthly releases of premium software production tools, starting with an exclusive suite of Fusion processor modules. In conjunction, SSL will also launch a series of studio quality tape echo, delay and de-esser processing plug-ins, all available before April 2022. All plug-ins will be available individually or as part of the SSL Complete Bundle subscription pack.

To begin with, SSL have launched SSL Fusion Vintage Drive and the SSL Fusion Stereo Image. Both plug-ins are modelled on the Fusion analogue hardware processor. They will be joined in the coming months by Violet EQ, HF Compressor and Transformer.

This announcement demonstrates our commitment to provide SSL legacy and future production tools to a wider audience of music production and audio creatives with plug-in versions. By providing different ownership options, we are also simplifying how users can evaluate and then invest in this hugely-expanding suite of authentic SSL creative software tools.

The SSL Fusion Vintage Drive plug-in is modelled on the Vintage Drive section of the SSL Fusion, bringing its unique, non-linear saturation circuit characteristics directly to the DAW. The Density and Drive controls on the plug-in interact to produce harmonics, soft-clipping and natural compression, reminiscent of pushing an analog console into its tonal 'sweet spot.'

The SSL Fusion Stereo Image plug-in, also modelled on the SSL Fusion hardware unit with reference to the original analogue circuit designs. Width and Space controls allow users to access a digital version of the Fusion's mid-side circuit directly in the DAW for detailed spatial manipulation of the stereo field.

These and all forthcoming plug-ins are compatible with all major DAWs and computer operating systems, and support VST2, VST3, AAX and AU plug-in formats.

All individual Fusion plug-in perpetual licenses will be priced at $199 / €159 / £139 (ex. local taxes) and will be available with an early adopters 25% discount for the first 30 days from their launch. Alternatively, they will be available as part of the SSL Complete Bundle Subscription, currently only $14.99 per/month (T&Cs apply).