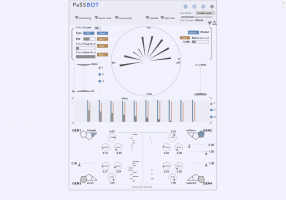 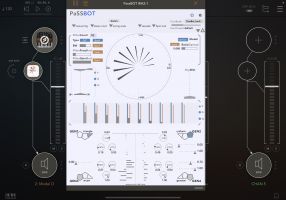 sonicLAB has released the iOS version of its stochastic filter bank PaSSBot and updated it to version2.1 for the VST3 and AU formats.

PaSSBot is a sound designer's chisel. It is a stochastic filter bank with powerful modulation capabilities. PaSSBot filter types are Biquad, StateVariableFilter, Ladder and Resonaters. With behaviors of bandpass, Lo + Hipass and up to 64 of them in true stereo.

The user can set values of center frequency, gain and resonance of the each filter, which will be then elaborated with powerful stochastic generators (4 independent GENs for each filter) with continuous or discrete probabilistic distributions but also with standard waveforms.

PaSSBot desktop version is comes in VST3 and AU formats for OS X and Windows systems in 64-bit format. PaSSBot iOS version comes as AUv3 and standalone formats for the iPad.

PaSSBot desktop version retail price is 69 Euros but the update launch discount offers it for 59 Euros until April 2021, and is available at the sonicLAB webstore.

PaSSBot iOS version is available at the AppStore.