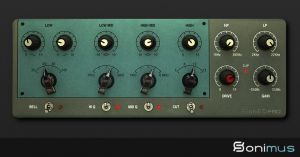 Sonimus adapted and incorporated the best qualities from the hardware classics into a single cohesive, yet versatile software design. As such, SonEQ Pro aims to serve as a first choice equalizer for mixing engineers of all genres.

Sonimus's first plugin, SonEQ (Free), began as a hobbyist's labor of love, but quickly became a powerful "go-to" mix tool for many amateurs and professionals alike. Drawing on expertise in analysis and design gained through creation of later plugins, Satson and Sweetone, Sonimus set out to build a completely new EQ from the ground up. Thus, SonEQ Pro was born.