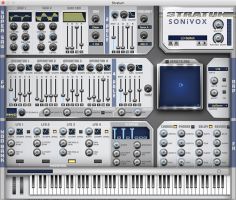 SONiVOX has released Stratum, a new virtual instrument that takes you down a wormhole straight into a 1980s futuristic soundscape. By combining fat, wide analog oscillators with a classic, crisp sounding FM engine, Stratum brings synth technologies from different eras together to give you the sound of future-past.

Stratum is a layering of a classic Supersaw synthesizer and a 4-operator FM synthesizer. Originally made famous by the Roland JP-8000, the Supersaw waveform has made a strong comeback in the trance and hardcore genres due to its edgy sound, particularly in synth leads and synth basses. Stratum takes this a step further by combining this classic waveform with a 4-operator FM synth, a noise generator and sub oscillator to produce a virtual instrument perfect for modern synthwave productions like those found in the recent hit series "Stranger Things" and the movie "Synchronicity OST".

Using the struQture audio engine from Qubiq Audio, Stratum also features two low-pass filters, a vocal format filter, and a tube distortion circuit to further enhance its sounds, all controllable by a simple modulation matrix featuring four LFOs with modwheel control and an 8-step sequencer called the Stepper. For users who need to punish their sounds even further, Stratum includes a unique XY Pad which can mix in a Bit Crusher, Dirty Phaser, Wah-Wah, and a Non-Linear Delay.

Arpeggiator enthusiasts will be happy to see not one, but two arpeggiators, one for the Supersaw synth and one for the FM synth. As the final polish to its sounds and tracks, Stratum includes built-in Chorus, Phaser, Delay and Reverb effects.