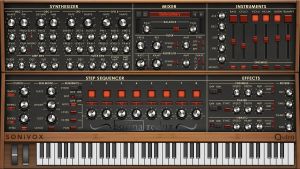 SONiVOX has announced the launch of Solina Redux, an Arp Solina string ensemble emulation. It's available at the introductory price of $129.99 USD from May 25th through June 30, 2018, after which, its price will be set at $249.99.

The Arp Solina was the pre-eminent string ensemble in the 1970's, made famous by the Eagles, Elton John, Pink Floyd, The Cure, Joy Division, Tangerine Dream, New Order and many others. Its analog Violin, Viola, Cello, Contra Bass, Trumpet and Horn sounds have a sound that creates rich retro sounding orchestral ensembles, especially with its famous "Ensemble" chorus effect.

Solina Redux gives users access to the original Solina sounds, including a model of the Ensemble chorus effect, but includes a modern virtual analog synthesizer as a sidecar. The combination of these two synthesizers provides a sound palette that is both retro and modern or anything in between at your discretion. Each synth includes a multi-mode filter, amplitude and filter envelopes, LFO modulations and send effects.