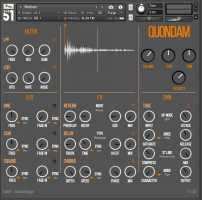 Sub51 has announced the release of Quondam for Kontakt and Komplete Kontrol, saying:

We are always open to a challenge, so when it was suggested that we create a varied sample library of pads, rhythms, drones, loops, effects, lead sounds and basses using only sounds sampled from a bass guitar being played, hit or scraped, we were only too happy to oblige.

Additionally there are effects comprising Reverb, Delay, Chorus, Phase and Flanger where all but reverb have host sync options. In the relevant sections, the sample start time can also be adjusted with the sample waveform displayed within the instrument's intuitive, single page GUI.

Komplete Kontrol users will also be able to get deep and fully hands on with Quondam's parameters via its intuitive layout and snapshots.

Quondam is capable of generating Taurus-like basses, textural drones, shifting pads, melodic rhythms, percussive spot effects and synth sounds that range from bell-like to Wavestation-style complexity. What you won't find is anything recognisable as a bass guitar.

Quondam will appeal to genres such as Ambient, Electro, Ethera, Experimental, EDM and more but in reality the only limitation is imagination.

Furthermore, with the exception of Quondam, Sub51 have reduced the price of all their libraries to £10 until 28 September, 2021.