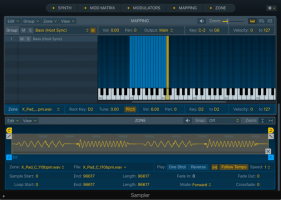 Sub51 has announced the release of the Logic Pro X Sampler version of Nuphoric Elements.

Nuphoric Elements was created by merging analog and digital sound sources with dynamic shaping such as EQ, multi band compression and further processing that included reverbs, delays and filtering.

Nuphoric Elements was created in collaboration with UK based music producer, Farsi and is influenced by the late '90s and early '00s euphoric, chill out and ambient fields.

Nuphoric Elements is currently available in the following formats and is priced at:

Logic ProSequencer / Multitrack
by Apple  $199.99
Add A Review My KVR