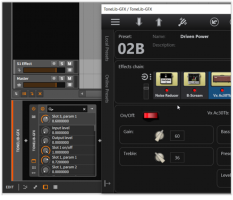 ToneLib GFX incorporates modules with emulations of real guitar rig elements achieved with software DSP to obtain tones with minimal CPU load and low latency. Its integrated preset librarian and IR manager also allow you to customize, backup and manage a built-in library of tones. All is managed within its user interface, which is designed to be simple, but powerful. The oversampling is auto-adjusted to a session's sample rate.

ToneLib GFX is not just for guitar. The included distortion, amp, delay, reverb, compressor and other effects can be utilized on any types of recordings.

ToneLib GFX also comes as a Standalone Application and as plug-ins for use with the most popular DAW recording software.