Toontrack has released Into the Dark EZX, an expansion for EZdrummer 2 and Superior Drummer 3 by producer/engineer/mixer Tom Dalgety tailored for a specifically dark, gritty and sinister sound.

This EZX presents the perfect mosaic of drums for any production that calls for an extra bit of that grisly, ghastly and raw tint of dark rock, post-punk and goth. Where better to capture just that than in its very cradle, where pioneering acts like Bauhaus, Echo & the Bunnymen, The Cult and many others struck chords that moved enough air to not only start a wave but also shape an entire sub-culture in its backwash? Welcome to the Into the Dark EZX and Rockfield, the world-famous Welsh dairy farm-turned-into-studio that has played an immense role in rock as we know it.

The Into the Dark EZX was recorded by multiple award-winning producer/mixer Tom Dalgety (Ghost, Rammstein, Pixies, Royal Blood) and drummer Mat Hector (Iggy Pop, Gutterdämmerung). It comes with three full drum kits as well as a bespoke set of cymbals and extra instruments derived from the Fields of Rock SDX. With the drums, the broad collection of presets engineered by Tom Dalgety as well as the custom MIDI library by Mat Hector, expect to get immersed in a monochrome journey that encapsulates the entire dark rock greyscale – from the blaring, raw and rebellious tones of post-punk to the dark, gruesome and macabre hue of industrial-tinged new wave and goth. 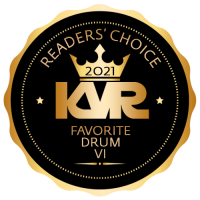 FEATURED
DUNE 3Synth (Analogue / Subtractive)
by Synapse Audio  $179.00
Add A Review My KVR
$179.00Buy
BUYING!XCheckout
Featured
Rigid Audio Everything Bundle Teaser
What's New @ KVR Audio
Plugins News Deals Reviews
Latest Forum Posts (Customize)
Continue this sentence with song lyricsby vurt @ 22:24 in Off Topic ClassicsSay something about the poster before you.by vurt @ 22:24 in Off Topic ClassicsBoutiques are stupid - build a 3U rack with all the Zenology modelsby vurt @ 22:23 in Hardware (Instruments and Effects)rick astley - never gonna give you up.by vurt @ 22:21 in Music CafeWhat is the best "Closed-Back Studio Reference Headphones"?by ctRy @ 22:17 in Getting Started (AKA What is the best...?)Introductionby ctRy @ 22:17 in Getting Started (AKA What is the best...?)Softube Modularby Raddler1 @ 22:11 in InstrumentsNeed testers for my x86 to x64 vst adapterby umd @ 22:08 in InstrumentsUVI Falcon - hybrid instrument - version 2.5 released - rumors, ads, praise and off-topic inside!by kobal @ 22:06 in InstrumentsWtb Studio One Artistby djstatix @ 22:06 in Sell & Buy (+Special Offers, Deals & Promos)Just got a Headrush Gigboard. Any tips?by audiojunkie @ 21:59 in GuitarsWhat are you listening to now? Look on my works, ye Mighty, and despair!by ayndryw @ 21:59 in Everything Else (Music related)Bandlab Cakewak vs Cubaseby Examigan @ 21:58 in Hosts & Applications (Sequencers, DAWs, Audio Editors, etc.)Anything to permute midi?by fairlyclose @ 21:57 in EffectsBehringer TD-3 Analog Bass Line Synthesizerby kritikon @ 21:55 in Hardware (Instruments and Effects)View All Latest Posts