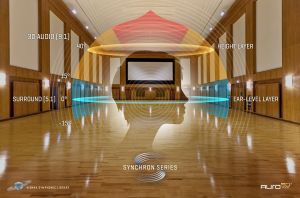 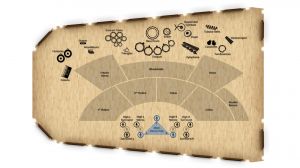 Vienna Symphonic Library has announced the release of a new library of orchestral percussion instruments: Synchron Percussion I was recorded at the company's newly revitalized scoring stage, Synchron Stage Vienna. 16 percussion instruments were captured in every nuanced detail with an expansive, phase-controlled multi-microphone set-up, making it, say VSL, "the first sample library ever that provides several available microphone positions and flexible routing options to create stereo, surround and Auro 3D mixes". The instruments stand out with their huge dynamic range and liveliness, providing up to 16 velocities and 8 variants of each hit.

Synchron Percussion I is currently available at a reduced introductory price through May 31, 2017.

The historic scoring stage was built in the 1940s, adjacent to Rosenhügel-Filmstudios as part of "Film City Vienna". Until 1955, up to ten film scores per year were recorded in the main hall that is large enough to accommodate a 130 piece orchestra. During the 1960s, eminent classical artists such as Karl Böhm, Herbert von Karajan, Yehudi Menuhin, Sviatoslav Richter and Mstislav Rostropovich chose the outstanding acoustics of this former "Synchronhalle" for their now-legendary recordings. In its fist year of operation after its renovation by Vienna Symphonic Library, Stage A hosted film music recordings for productions such as Inferno, The Crown, Lego Batman, Ghost in a Shell, in addition to several video games, commercials, classical recordings and many others. Naturally, the colossal room-in-room construction with an extremely low noise-floor of 16 dBA, even with the air conditioner running, is a remarkable space to create sample libraries.

Since Vienna Symphonic Library owns both the scoring stage and the instruments, it was possible to schedule a tremendous number of recording sessions. One hundred hours alone were spent on capturing all the nuanced playing techniques of the five timpani. The celesta was played using a sampling robot, which captured the subtlety of this beautiful instrument with 36 velocity layers. Other instruments of Synchron Percussion I include bass drum, snare drum, eight concert toms, xylophone, glockenspiel, suspended cymbals, piatti, two tam-tams, tubular bells, two tambourines, seven triangles, five woodblocks, two pairs of castanets and two different shakers.

All instruments were recorded with an expansive, phase-controlled multi-microphone setup, including close and mid-layer mics, a Decca tree and an Auro 3D configuration. The result is a comprehensive selection of discrete audio channels that gives users the flexibility to mix their instruments in stereo, surround and immersive 3D sound. Synchron Percussion I comes with fine-tuned presets for the Vienna Instruments and Vienna Instruments Pro players, as well as for the mixing hosts Vienna Ensemble and Vienna Ensemble Pro.

The instrument groups of this collection may also be purchased in six separately available library portions: Synchron Timpani I, Synchron Drums I, Synchron Mallets I, Synchron Cymbals & Gongs I, Synchron Bells I, and Synchron Orchestral Percussion I.

Users benefit from Complementary Discounts when completing one or more library portions to the full Collection at a later time.