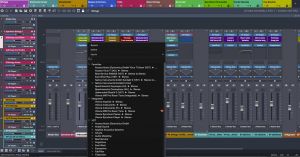 The Vienna Symphonic Library (VSL) has released Vienna Ensemble Pro 7, a major update of their most popular cross-platform mixing and hosting application that easily connects multiple computers with simple Ethernet cables, without the need of external MIDI or audio interfaces.

New features include simplified automation as well as a slew of interface improvements such as real-time readouts of CPU usage per instance, MIDI and audio activity buttons for every instance, and mini GUI displays of the integrated FX plug-ins right in the channel view.

Both plug-in handling and the plug-in scanning process have been significantly improved. The auto populate feature displays the most frequently used effects and instrument plug-ins that can be enabled or disabled one-by-one, for AU and VST formats separately.

Complete instances and folders can now be enabled or disabled, even using automation from within the DAW. Users of large setups will appreciate the new instance overview options with tabbed or vertical views, as well as the option of copying and pasting channels in order to quickly pull channels from existing templates.

Beyond the host of new features, the upgrade includes the expanded Epic Orchestra 2.0, a 73 GB bonus library powered by the company's new Synchron Player.