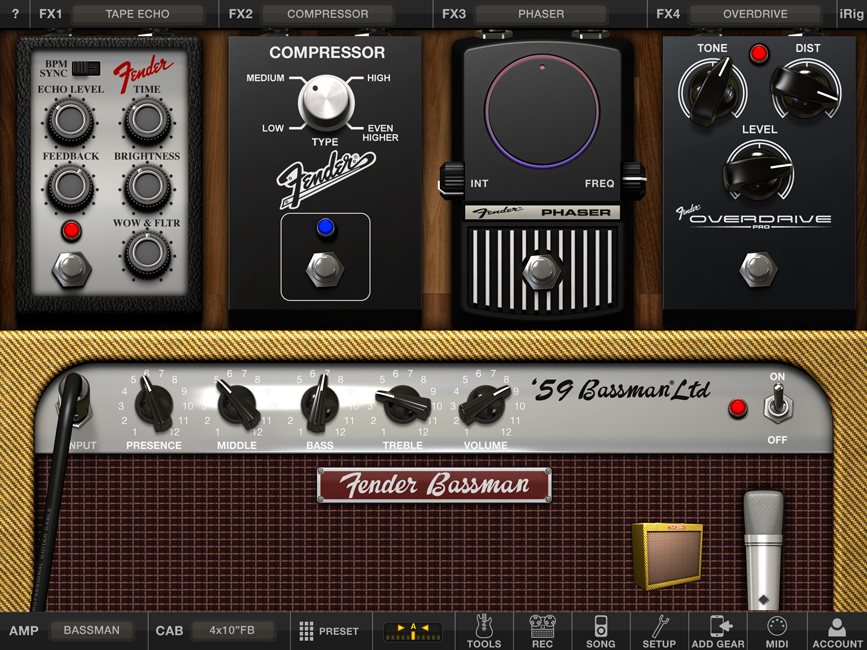 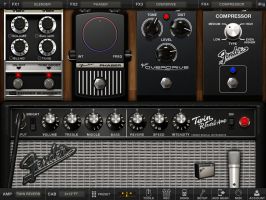 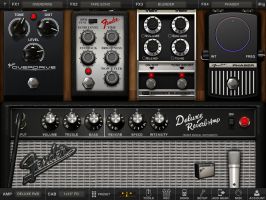 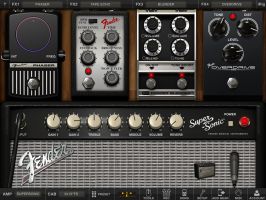 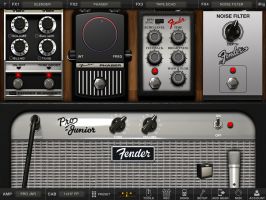 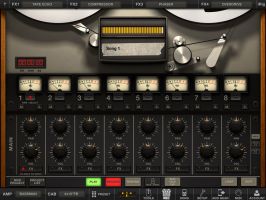 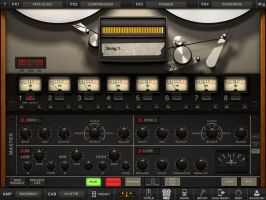 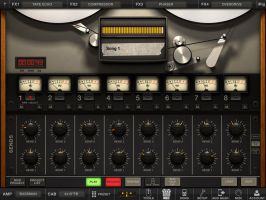 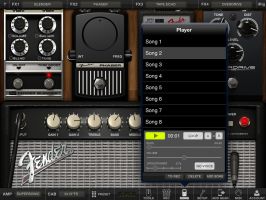 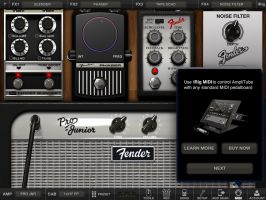 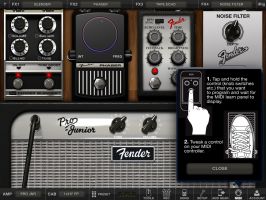 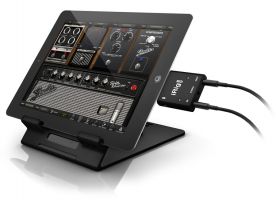 The AmpliTube Fender for iPad app at its core is all about pure Fender tone. It was developed with careful guidance and critical tone testing from the tone gurus at Fender to ensure the authenticity of the sound. Derived from the award-winning desktop recording studio version AmpliTube Fender, you can choose from 5 Fender amp models — the '65 Deluxe Reverb, the Super-Sonic, the '65 Twin Reverb, the '59 Bassman LTD and the Pro Junior. Custom craft your mobile tone with 6 Fender Stompbox models — Fender Tape Echo, Compressor, the Fender Blender, Fender Phaser, Overdrive and Noise Filter.

The AmpliTube Fender for iPad app features a robust practicing tool that allows you to import audio material, then change the tempo without affecting the pitch. You can load songs, backing tracks or loops from your iPod library on your device or from your computer, then use your guitar signal chain to practice along with the material. The SpeedTrainer feature provides the ability to slow down material (-50%) to learn complex riffs, or speed up material (+200%) to practice your playing skills.

The unique AmpliTube Fender for iPad signal chain lets build your Fender rig with 4 simultaneous stompbox effects, running into an amplifier head, speaker cabinet and microphone. Each element of your tone is individually selectable, with fully operational controls for ultimate 'tweak-ability'. Plus, current AmpliTube 2 for iPad app users can add all of the components of AmpliTube Fender for iPad into their current app, incorporating that famous Fender tone into their current sound.

AmpliTube Fender for iPad features MIDI control that allows you to use a standard MIDI controller to adjust the knobs, settings and parameters of Fender gear. With a MIDI interface for iPhone/iPod touch (like the iRig MIDI), you can hook your controller to your iPhone/iPod touch and use AmpliTube Fender "hands-free" live in the studio or on stage.

AmpliTube Fender for iPad comes with a built-in single track recorder with re-amping ability, expandable to a full-featured 8-Track Recorder with a separate mixer and master effects section. You can capture your ideas quickly by recording your performances then share your track by exporting high quality audio files or M4As directly to SoundCloud, FTP or email. You can record your band, or produce full songs and compositions directly in AmpliTube Fender. AmpliTube Fender for iPad also supports digital audio input via the 30-pin connector. Use your StealthPlug audio interface for pristine audio clarity (requires the Apple Camera connection kit).

The AmpliTube Fender is available on the App Store in 2 versions. Already own the AmpliTube for iPad? No problem! Upgrade to version 2.5 to get the latest features like MIDI control, digital audio, audio copy/paste and more. AmpliTube Fender stomp box and amplifier models are available as bundled or individual in-app purchase.

Use iRig or iRig Stomp or StealthPlug to connect your guitar to your iPad.