Cameleon 5000 by Camel Audio is a Virtual Instrument Audio Plugin. It functions as a VST Plugin and an Audio Units Plugin. 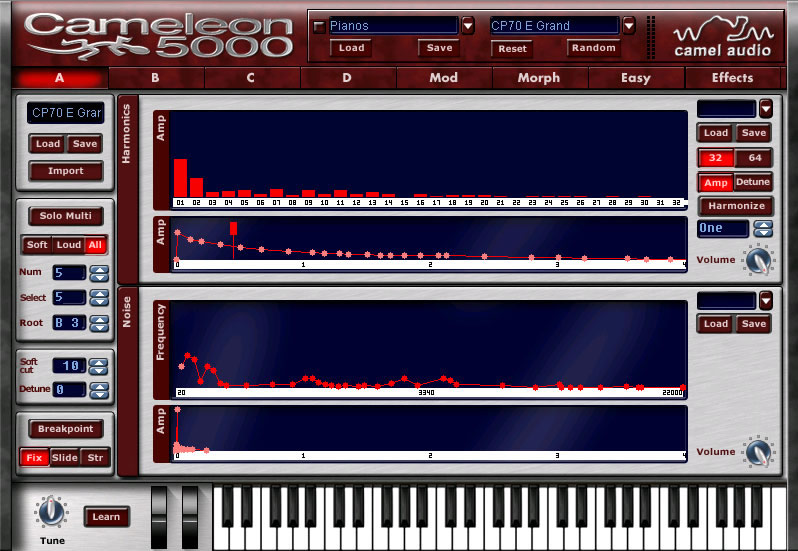 Cameleon 5000 is an additive synthesizer with morphing and resynthesis capabilities. Resynthesis allows you to import WAV/AIFF files and then manipulate them in ways which are impossible with a conventional sampler. The morphing capabilities offer a new approach to sound design; allowing you to pick different characteristics from a palette of sounds. The morph timeline also allows you to create evolving soundscapes, pads and leads.

Cameleon5000 is a synth with Huge abilities but this means, you have to use several of its special functions, and this could be a little complicated. Additive synthesis is hard to program and this is why Cam5000 has a special GUI (I really like this animal drawing on it) with pages named A / B / C / D / MOD / MORPH / EASY , which helps users with its simplicity - to perform those "out of this world" sounds that sells this synth worldwide. Its structure is simple, stands on four legs, and these are the 4 voice programs, and they can contain "multisamples" - so each voice program can contain 8 voice programs inside itself. CAMELEON is not a sampler and is behaving a much more special way - it can import wav files, analyze it and build the voice program from the properties and spectrum of that imported sample.
Several Times I tried to import all kind of samples, but the result was far from what I wanted. Then I read the manual about the importing rules you have to follow, and it started to work. For immediate result, you have to import 'one-shot' sounds without any effect. However, trying other sounds can lead to surprising results (try to import pure singing or voice sounds!) Apart from these, cam5000 can import standard bmp-files too, and this is another pioneer sound design tool. At this part, you have to follow some image editing rule, the well written manual covers these too. I used the synth in hosts like Acid and Fruityloops and in the free tracker - Jeskola Buzz and I don't remember a single crash, this is a stable plugin. Presets are good, but there are several similar factory pres. so I gave the rating only 9. Some presets are really gorgeous, but you can program sounds that are better and dozens of user presets can be found on the net. In my opinion cam5000 is for those musicians, who are to design their own sounds, and not afraid of a little programming to achieve great and unique output (in this view, it's a bit absynth-like). If you're tired of trying to produce some new, just push random and you will get a new bass / lead or just that sound, in which category you are. With its morph square and morph timeline it does a trick you can find in WNA Zerovector(that has a morph triangle ..) and there are further morph settings in cam5000 - morphing through only the harmonics part / or the noise part / or morph all sound parameters - you decide. More Pros: several Morph settings, randomizing, sophisticated settings handling (almost every module have their own preset so you can save voice programs, harmonic or noise parts, full instrument settings, morph settings, formant filter settings - yes, it has one!) Last but not least, some words about the price: It has a fair price for a great synth with so many features, I gave VFM only 8 because comparing it to other nice-sounding products which are cheaper, Anyway, just nowadays, Camel Audio made a massive discount, so don't let it expire if you planned to get a strong additive synth. Customer support are quite good, the website has a well designed members area.Read more

This is a very deep and capable synthesizer. i had to stop auditioning the presets because there are just too many of them! Cameleon is a synth to spend hours with whether auditioning presets or building sounds of your own. If you want to create unnatural sounds, it's very easy to do so. The presets include some very good emulations of natural sounds, but the real power here is in making evolving pads and atmospheric textures.

If i had to complain, it would be that the UI is flakey (buttons behave un-traditional or sometimes refuse to acknowledge clicks if you move around too fast, virtual keyboard sticks notes, and screen redraw is temperamental; annoying sometimes but still totally workable). Biggest problem is the standalone version; crash prone (apparently using some VST player wrapper and therein lies the problem - so says the crash report). So stick with a VST host (this is why i am voting high on the stability portion in the ratings list).

My only complaints about the presets: there are too many of the same kinds of sounds (come on, we can press Randomize buttons ourselves to seek variations on the same sound", there is a great lack of dynamic variation and too many presets lack many standard controller setups (like sustain pedal and aftertouch). You can change that and save the updated presets if you care to.

Overal, so far my playing experience (while in a VST Host) has been fun and i hope to learn more about additive synthesis by reading the manual and expirimenting. My experience with additive synthesis so far has been Cameleon, Cube (just ordered Cube 2) and the Roland MT-32 ("Linear Arithmatic Synthesis, which is a shadow of the D50 it is based on and barely comparable to the likes of Cube and Cameleon). The MT-32 is impossible to program; the one guy who has managed to make neat sounds out of it wont explain his techniques though he offers a modified SoundDiver mod, which i can't get to work. Soon i hope to play with the D50 (via V-Synth XT), which was the original LA Synth. Do i have too many of the same things here? No. Each one has its own personality, methodology and character. i am begining to get an idea of what additive synthesis is capable of and Cameleon is, so far, a very interesting education on the process. While i prefer "clean and technologically advanced rack-like" UIs for VSTs, Cameleon's is stylish and well laid out if a bit bumpy ;-)

Wishes? i really would like to see some more dynamics and better setups for controllers in the presets, but again, this is a sound designer's tool. Not a rompler. If you want as many tools as possible to make your own sounds, this fits nicely into the tool kit. Worth the cost? i don't know. i've been spending wildly lately (partially to get 100% legit on all the tools i use (100% there, now, yay!).Read more

This is a BIG synth. The evolvong textures which this synth is known for have to be some of the most beautiful sounds you will ever get out of your computer.
You can tell that a lot of thought and energy as well as a lot of love for the generation of music has driven the design and execution of this software,
I have found that some of the ideas and concepts I have wanted to have in my music is very attainable with the Cameleon5000.
The ability to create new presets is a given with any good synth. The abiltiy to create new soundworlds with a softsynth is under the sole ownership of the Cameleon5K.
You DO have to read the manual. Again you DO have to read the manual. If you wnat to get a good handle on the intricacies of this product. It isn't difficult but the nuances you will need to create your sound are covered there.
Excellent product, excellent output. Not much else to say. It's that good.
The documentation is well put together. But I do think it could be expanded on somewhat. A little more explanation of the use of images in Cameleon as well as the creation of evolution pathing would not be amiss here. It is understandable to those who have mucked about in this area previously but for the newcomer may leave them with some questions.
Is it worth the money? YES it is. Go for it you will not be disappointed.Read more

With all the additives out now it's a little easier to evaluate C5000 than it was when it was one of the only additive synths available. I must admit I'm not a big fan of additives in general. I find their sound a little plastic and hollow and samey. Most of them need a lot of effect processing to have much presence.

C5000 is especially guilty of this. A quick spin through the preset banks reveals quite a few very nice airy soundscape pads and lots of very unconvincing and thin leads & basses. It's a bit of a one-trick pony, but it does perform its one trick quite well. If you're looking for a pad machine with a very digital and synthetic sound that allows for some fairly complex evolving sounds then this might just fit the bill. C5000's resynthesis functions are pretty poor compared to things like Vertigo, Doppelmangler, and Cube2, so don't expect to use it to construct believable hybrids of real acoustic or electric instruments.

The interface is nicely laid out and fairly intuitive. CPU usage is modest, especially considering all the effects that are enabled on most patches. The onboard effects are good enough that you'd probably just leave them on instead of replacing them with better, dedicated alternatives most of the time. Overall though, I think this has been outclassed by some of the other additives. If you really want to explore these kinds of sounds I'd suggest you first look into Cube2, Vertigo, Doppelmangler, White Noise's Additive, or even ConcreteFX's Adder. I can't imagine why this is currently the top-rated synth here at KVR.Read more

Hey guys, this Cameleon is a pure sound making factory !
Very easy to program and you get great results most of the time.

If you want new and fresh sounds,
not again another analog simulation,
Ca5000 is the best buy you can make.

Never, ever I spend so much time making sounds with any VSTi.
Also never I had so much fun and "WAO" effects like with this animal.

Let the Cameleon change its colors, there are many !