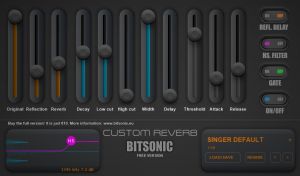 Custom reverb was created so that the sound is as close to real life as possible, and users can choose from many different options: