Fairchild 670 Compressor by Universal Audio is a Virtual Effect Audio Plugin. It functions as a VST Plugin, an Audio Units Plugin, an RTAS Plugin and an AAX Plugin. UAD Hardware is required. 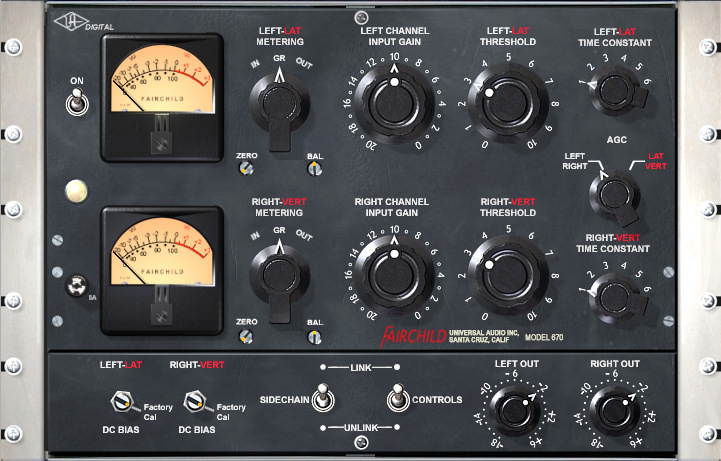 The two channel Fairchild 670 is often described as the "Holy Grail" of compressors in studio gear esoterica, not only because of its price (around $30,000 on the vintage market), but its extreme rareness and the difficulties in maintaining such a piece. With 14 transformers, 20 vacuum tubes, and a 6 rack-space encompassing girth, the 670 is the heavyweight champion of compression weighing in at 65 pounds. UA's emulation is modeled after Allen Side's favorite unit from Ocean Way Studios. UA went to great efforts to capture the unique sonics of this famous mu-type tube limiter, as well as maintain all the features of the original. UA adds an auxiliary panel allowing access to rear access controls, common mods, and unique Universal Audio only features.

A Note about UAD Powered Plug-ins
UAD-2 and UAD-1 Powered Plug-Ins run exclusively on Universal Audio's UAD DSP Accelerator Cards. All available Powered Plug-Ins are included in the UAD Software Installer/Updater Package; and every Plug-In title has a separately activated 14-day trial -- so users can try before they buy, at their own pace. Once a user decides to purchase a Plug-In, they can click on the Plug-In toolbar "Buy" button, which automatically takes them to the www.uaudio.com website and carts the plug in; or this can be done manually via browsing our webstore. Once the purchase is complete, a downloadable Authorization File is made available. Users simply drag and drop this Auth. File into the UAD meter, and the Plug-In is authorized. UAD-1 users can transfer Plug-In licenses to UAD-2 format for free (one time only). Via Customer Support, Universal Audio also allows registered UAD owners to sell their UAD card(s) with Plug-In licenses, transferring the licenses to the new card owner (subject to Universal Audio approval).

Just one of the best there is.. period.