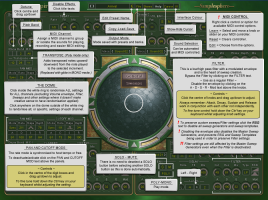 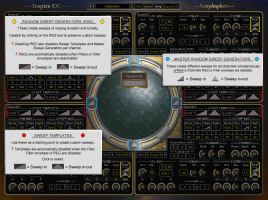 Please download from our site only - other sites providing a direct download aren't authorised to do so and may even charge for membership before allowing a download (royally ripping people off). Downloading from any site other than Samplesphere you are also risking the integrity of the files being corrupt or tampered with.

Inspire CC is a stereo or multi out sample based synth with four channels, each having its own sound source, controls and options. Although designed primarily to produce rich pads Inspire CC is capable of shorter sounds such as bass and other hard attack sounds.

The Dome randomises all four channels simultaneously or specific parts of each channel. Apart from the Domes centre it has intentionally been left unstated what other areas randomise to introduce absolute chance and maybe inspire new musical pieces as a result - see the general help picture. Obviously through trial and error it can be discovered what each part of the Dome randomises, if that is so desired.

The random sweep generators (RSG) for each of the four channels create sweeps of varying speed and tonality. The master random sweep generators do exactly the same as the RSGs but for all four channels simultaneously, creating different sweeps for each channel. The generated sweeps can be so subtle as to be almost imperceptible, powerfully dramatic or anywhere between the two. There are also sweep templates to aid the creation of custom sweeps. Sweeps can be turned off for each channel by disabling the filter envelope resulting in a regular low/high pass filter.

Using only the Dome and the random sweep generators it's quick and easy to create useful presets for Inspire CC.

Right click anything to check for available MIDI control.

Automation is available for all parameters that make creative sense to have it.

There are more preset banks other than the default.

All audio demos were created using only one instance of Inspire CC (with added drums).

Why 32-bit VST only? Many third party SynthEdit modules were used to create Inspire CC and, unfortunately, there are no 64-bit versions of the modules.

Average user rating of 4.00 from 3 reviews
Read all reviews Add A Review

This is the best of all the vst's in the competition by far. This thing makes better pads than anything I have ever heard. Gets a 15 out of 10.

Immediate "dope" effect when testing the randomise tricks with Dome for several/all settings and generators for sweeps.

Very nice context help for all the parameters.

While the Dome looks "futuristic" the overall gui with different main colors for presets appear a bit oldfashioned to me.

CPU usuage not optimized. Rendering of good results would be recommended.

Randomise of sweeps is good, but the pool of waveforms/samples should be expanded for more different results.

Recommended instrument, when one needs a "Pad trademark" for ambient music projects.

Great sounding pad monster!, but in Cockos Reaper (PC) the Synth's graphic UI goes into the background (gets hidden behind Reaper) when I go to hit record, etc. All my other 32-bit synths always stay in the foreground when attention is not on them anymore, anything I can do on my end? Its an excellent sounding synth, but to have it dissapear everytime its not getting attention is frustrating argh.

Found this in the Reaper user guide>>>

Keeping a Window on Top
The small pin shown on the right of the title bar of most windows (just before the
X) can be used to pin a window to keep it on top. Click on this to toggle its on top
status. When the pin is shown in the down position, the window is locked on top.

Hey thanks for looking that up for me Samplesphere! It worked! I never bothered looking it up myself cause literally every 32-bit bridged plugin in Reaper I've used for the past decade has just automatically stayed on top, this is the first .. but hitting the pin worked .. problem solved! Its really a great quality sounding synth .. now that I can keep it on top I look forward to tweaking some patches .. but your stock patches are sweet. Thanks again man! Will go give this a big vote right now.

Happy I could help out. It could be you accidently clicked the pin after opening Inspire CC.

I don't know if you've checked the other banks of presets or not so I thought I'd mention their existence here.

Hey thanks for mentioning those other banks! I guess eventually I'd have found em .. but now I'm further ahead faster :) Another thing I like is how the UI color changes with every patch .. helps when using small screens like my 9.7" iPad which mirrors my PC's screen remotely via Jump Desktop VPN. Kudos.

It's a great synth, creativity flows so freely when making new presets, that you could almost perform a complete theme with only one of them. If generators were be able to import external sounds, the creation possibilities would be unlimited. Will it be possible to do it in future updates? Thanks so much.

trying to find this dang vst. how can a synth that won the "KVR Devleoper Challenge" just suddenly disappear?

kidnay, the internet is not a stable place. But if you wish do use the synth, go to archive.org and paste the download link into the url search field and choose one of the possible captures, say, from 2019. samplesphere Inspire CC Download page Mar 17 2019