Microtonic (µTonic) by Sonic Charge is a Virtual Instrument Audio Plugin. It functions as a VST Plugin and an Audio Units Plugin. 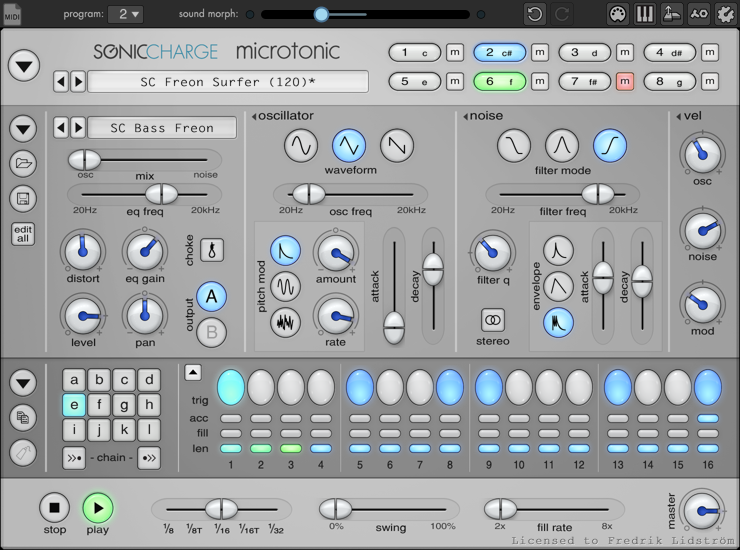 Sonic Charge Microtonic (also known as "µTonic") is a drum and percussion synthesizer combined with a pattern based drum-machine engine.

You can use µTonic as a sound module to play drum sounds from your MIDI keyboard or sequencer, or you can use the built-in pattern engine to play drum patterns in sync with your sequencer. The sound of µTonic is 100% synthetic and rendered in real-time. No samples or pre-rendered waveforms are used.

Sonic Charge µTonic was created by Magnus Lidström. Magnus is best known for his work with Propellerhead Software. In particular, he was the brain behind the highly acclaimed Malström synthesizer introduced in Reason 2.0. (Magnus is also responsible for Typhoon, the alternative OS for the Yamaha TX16W.).

Easy and intuitive to program. Initially the 'chained' patterns are not easy to handle, but it doesn't take long to master. It's actually a very powerful feature, and allows for complex sequencing.

I personally love the graphics, and the various colours make it very easy to see what is going on.

There is just one feature i would like to see: to be able to copy a single instrument's pattern sequence and copy it to another pattern. Not indespensable, but could be handy.

EDIT. The feature i thought was missing, is already there! You just need to option click when copy pasting patterns to edit a single drum voices pattern.
This drum machine is truly powerful, and the more i use it, the more i love it. The new Sonic Recharge bank of patches is brilliant.

It can be used in many different ways: as a sound generator, synth, drum machine, drum synth, etc...
The midi controller implementation is fully featured, as is host automation. Every possible parameter can be automated, and you can even use a computer keyboard to record automation takes. This is one of the instrument's strong points: total control.

The many supplied presets are excellent inspirational starting points.

Overall an awesome beat box which is worth a lot more than it costs !!!Read more

> link buttons which tell 'Tonic what to play after (or as a shortcut, what comes before) the current pattern. Pretty simple.

You can also cut & paste patterns all over the place, so simple.

Also, there are nice sliders at the bottom for roll time (to go from 'da-da-da' to "bzzzzzzzzzt!'), swing, and tempo match.

It's pretty easy to dial up a new drum sound, but my guess is you won't need to (often). There is an army of included presets that suit most music where you'd find a beat box.

User Interface: I was at first put-off by the "Aqua" look, but it's actually very easy to use.

Sound: @#$%^&-ing brilliant. Exactly what you'd want in an electronic drum machine, and then some. One thing to note is that it also supports "tuned" patches, so you can go nuts with the sounds.

Features: The only thing I feel lacking in the step sequencer is the ability to set more velocity levels. However, since I can easily cut & paste any pattern or set of patterns back into my sequencer, it's super easy to do final tweaks there. The "random" button is also excellent for industrial or ambient tracks. Just press "play" and hit the button till you get something odd or nasty. Nice! It supports either a 4-out (2 stereo pairs) which you can easily choose A/B for each part, or a separate out for each patch you have dialed up.

Documentation: very good, though I haven't needed it.

Customer Support: haven't needed it yet, but I got a prompt response on a new feature request.

Value for Money: It's more than I wanted to spend for a beat box in general, by about $20. But I'm cheap, and it was worth it anyway.

The sound that comes out of this VSTi is great. Filters run smoothly and the bass drums, snares and claps are better then most I've ever heard. The range of all the drum and percussive sounds is, since the editing is so easy, nothing but marvelous.

I'm a preset guy myself, so I actually got really surprised how much I like to tweak this machine. All the controls that I need is up front and there's no science to editing presets (or patterns). Out of the box you get a bunch of programs (patterns) and presets (drum and percussive sounds) that work great as a start. (Cliche but nevertheless true.)

The step sequencer is easy and straight forward. Programming patterns are made in a 808/909 fashion and two or more patterns can be linked to make up larger pattern chains. Copy, paste and other expected sequencer features are all there. Other reviews here on kvr say that the sequencer is the weak part of this VSTi but I must say that I can't agree. I like it, I like it a lot. I mean, beside ease of use it's got MIDI out, something that is really useful for me.

With the latest update (version 2.0) the two main features that I was missing, eight separate outputs and midi CC learn, are included. Among the new features the direct preview when browsing programs and presets (in sync) and the pitched MIDI mode stands out from the rest.

So what's the downside? Well, when loading a program you're not only loading a set of presets (drum sounds) but also the patterns. The option to load "only" presets and not the patterns of a program would give a more "standard" feeling of loading/saving drum kits. This would be good for trying out different drum sounds to an already perfected set of patterns.

The UI works great from an usability point of view, the looks of the UI however is not what it could be. Icing on the cake would, IMHO, be a more photo realistic (3d) look that breathes more of a vintage-analog-VCO controlled-feel to it. (Something like Tassman4 to be more exact..)Read more

I slep on this one at first, it had been out for two months before I noticed it on the KVR ad banner. I said "fuck it! I have nothing else to do , I'll try the demo". Whoa! This damn VST is the best fuckin thing I have heard in a long time! The sound quality is amazing,everything in it is tweakable. I have been looking for something like this for a long time. I just have to say I can't wait to see what Sonic Charge does next! This Vst is going to be a classic along side the Pentagon I.Read more

GUI: I love the sound editing area and I hate the step sequencer area. As already mentioned by another reviewer, 16 steps is not enough. Moreover, I would prefer to have a more fine-grained access to step velocities than just normal and accented beat. The worst thing, however, is that you can only see a pattern for one channel at a time. When I'm programming beats I need to see the whole picture, so this limited one-channel-only view renders the µtronic step sequencer more or less useless for me. Also, the pattern chaining mode seems a little bit awkward to me. On the positive side, there is a lots of commands which ease the management of drum kits and patterns a lot.

Sound: Just great. It cuts though everything without being painful.

Features: All you need from an electronic drum module. Can be both nasty and very clean. Great versatility with a very modest amount of parameters.

Documentation: Very good manual which covers everything you need to know in a clear and simple language. I just don't like that it comes as html, I had preferred a pdf document.

Presets: myriads, both patches and patterns

Customer support: My questions were answered within two days at max, unfortunately without being able to solve my problem (see below). As a positive side remark: there was a very nice free Xmas package with additional patches.

VFM: although 70 bucks is at my upper limit for a specialized plug, I consider the VFM very good.

Stability: never ever had a crash, although I sometimes treated it not too good (changing whole drum kits while it was playing etc.). A big nuisance, however, is that when you record midi notes through the midi output of the plug, these notes are mostly out of sync. The developer is aware of the problem (which seems only to occur in Cubase SX) but wasn't able to fix it so far. Also, µtronic sometimes seems to ignore the start/stop commands via midi notes.Read more

I picked up Microtonic a couple of months ago and use it in everything i do now. Can't believe i never purchased this one earlier. Everything about it is great. Its a really fun and great sounding drum synth. Top notch for House and Minimal beats among others. Probably one of the best purchases iv'e made for my needs. This ones a keeper. I'd love to see some extra features but as it stands right now it's just perfect.

You bet ya. It's a quick way to some really creative hits...and basses...and FX. It helped to teach me what a bass drum can be besides a beater in the front, a bump and sin wave slide. So much more is possible with this, esp with 96 or so semi modulation range on the pitch and the various modulation options in this section. Synthesis engine. That simple interface is very misleading because some of the controls are actually dependent on other controls' settings. Experimentation is the key with this one. There are great options for getting patterns to the grid in a DAW and there are some fantastic Scripts with the semi-new script engine that can be added to help workflow and other neat things. It's a fantastic tool indeed. Congrats on yr new acquisition, may it continue to provide fruits. Cheers.

I Love this drummachine! To be able to play the parts separately with keyboard in different pitches is an outstanding feature.

Is it just me or did a DC-offset bug krept in on windows 7 when turning up the distortion? It was fine on XP.. tried it at a diffrent DAW and pc, but still the same bug.. DC-offset sucks. : (.

maybe i have some wrong settings in Win7? strange that i can't find anyone else posting on this matter.

turns out the DC-offset is also on XP ...maybe i didn't notice it before.. but its very obvious when turning distortion up and EQ-gain to the negative side (left)

And if you sucked it dry completely you can use the sequencer to trigger other instruments because it transmits MIDI out.

Average user rating of 4.63 from 8 reviews