Motion by Ugo is a Virtual Instrument Audio Plugin. It functions as a VST Plugin. 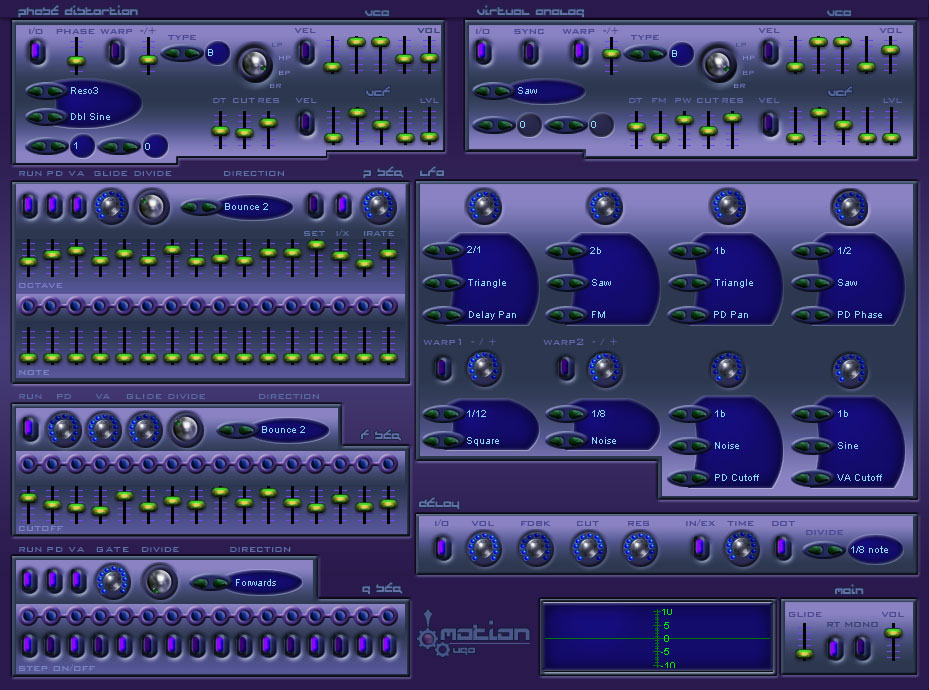 Motion is a Rhythmic Synthesizer that can create a wide variety of tones, from powerful bass lines and snarling leads, to haunting soundscapes that slowly warp and twist.

I've used Motion since a much earlier version. Since I constructed some patches for Motion 2.8 to enter a competition, I thought it was only right that I give it a review.

Motion comes with a brief but handy set of instructions to get someone started. Motion includes 128 presets, most of them fairy interesting and outline what the synth is capable of doing. There is a phase distortion oscillator and virtual analog oscillator with on/off switches for each, which makes it easier to hear each oscillator independently before combing them together for an overall sound. Each oscillator is divided into its own section and offers a general ADSR amplitude envelope, a filter envelope, and a button to enable velocity sensitivity. Each oscillator can be coarse tuned, step tuned, and contains a quality detune slider to add some thickness to the sound. The phase distortion oscillator also feeds into the virtual analog oscillator with an FM slider if one desires.

The sequencer section can be run freely or synced to the host’s bpm, and offers a “set” button to restart the sequencer from the beginning to ensure that a saved patch will sound correctly at a later date. My only complaint in this section is that it’s difficult to see if the octave sliders are all lined up in the pitch sequencer section. They may look lined up, but it’s not always the case. The sequencer section can add some unique movement to the pitch and/or filter of either or both oscillators. It’s very simple and quick to create some decent rhythmic loops. There’s even a button to randomize a patch to get yourself started.

I find that the power in this synth is really in the LFO section however, with numerous destinations to choose from. The LFOs can be synced to the tempos, and it’s the best place to start when trying to create a great sounding swirling pad. A good feature and great way to make some motion-like sound is to send an LFO to the PD Phase, and then send another LFO to the FM. The delay is also useful to thicken up a pad, or create some faint echoes in a rhythmic pattern.

Whatever the composite number for Ugo's Motion 2.5 ends up being you should check this out.

First, although the interface a bit too blue and monochromatic it is still somewhat striking and highly functional.

There is an element of surprise to Motion 2.5 in that you know what to expect from Motion's interface and you get it but often a bit differently than you expected. That too can sound negative but it's not, it's a pleasant surprise. There is a responsiveness to Motion's interface that makes it feel comfortable very quickly.

It's use of phase distiontion and virtual analog with FM make for a nice sound palate. The things that add to the sound quality are the waveshapers, multiple LFOs, 16 step sequencers for pitch, filter and gate really liven up the programming and create some very complex and useful timbres.

If this weren't a free synth it would be worth considering purchasing within the $50 range and goes up well against synths like Space Synth in sound quality and creative use of interface. Great for pads, phrase type patches, evolving timbres and effects Motion is a must for the budget minded (free) user and for those able to afford interesting synths like this.

SynthEdit synths are widely available and as users we sometimes take these people for granted. Ugo has done a teriffic job here and his praise is well earned.Read more

I've been using Motion now on all my past track and have grown with this beast of a synth.... A few dedicated moments to tweaking and trying the various knobs and its effect makes for the best results from this synth.

Two separate vco's (phase distortion and virtual analog) make for the basics of a sound, and allow heavy tweaking and interesting settings. The warp slider and warp-type selector are must-tweak material here.

Although the filters are not Ugo's best they are quite acceptable and definable.

So far the basics of the sound....

With it's 8 lfo settings! you can route the lfo's to quite much detail in the time-movement where all lfo's are tempo synced.... (do try the 1/12 setting for interesting rhythmic movements)

The three added sequencers move independent of the tempo, and even though they usurp large amounts of CPU, they are well worth the try to add to movement of the lfo's allowing even more rhythmics in a single patch.

Last but not least is the delay, which although is missing pan-settings, it can just give that final depth-punch to the sound.

And in the lowright section there is an added frequency oscillator to graphically show the vco's at work....

In short, I am leary of this synth as it never fails to bring highly interesting sounds....

True, this synth is very CPU hungry.... but there are ways around that.

Give it a spin, it's free anyhowRead more

Average user rating of 4.00 from 3 reviews