Nils K1v by Nils Schneider is a Virtual Instrument Audio Plugin for Windows and Linux. It functions as a VST Plugin. 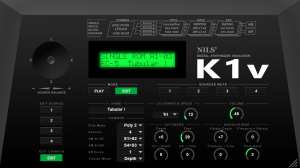 Nils' K1v is a classic rompler that emulates a famous japanese classic from 1988.

I can't believe it !!!!! I've owned a desktop version which I had bought in the late eighties/early nineties..

Just a few months ago I've sold it and regretted it instantly.. Now it's back.. For good...

I say it's back because it is a brilliant replica and I know what I'm talking about... I've had it for 30 or so years and know it inside out...

this emulation is great, I love it! Thank you very much.

I spotted one problem with version 1.0.8 though: Omnibus Loop Samples seem not to be retriggered when playing new notes. Instead they seem to be looped internally for ever, though they are not audible. So when playing instruments with these samples they start somewhere in the middle of the sample, depending on the current position of the internal sample pointer. I am not sure if this is also true for the other looped samples as well.

I had a K1 in the past and I think this one is much less noisy than the hardware.

It's a very accurate recreation and I retrieve all the sounds I used with great pleasure.

I was impressed with this plugin. I did a review on it. You can find it here. https://youtu.be/utdAsVkf_q8.

Wow, this really is a blast from the past! I've just spent the last two hours playing with this and they were two of the fastest hours I've experienced in a long time. This really is an outstanding offering, one I think will really stand the test of time and build up and army of followers/users for a long time to come.

The sounds /presets are amazingly accurate and clear, while the UI is intuitive and easy to use. The interface looks a little dated, but I guess it could hardly be anything else when you remember what it is we're dealing with here. Still, it would be a nice touch to have skins for this at some future point, as well as an FX page under the Mode section. tucked away out of sight, so as not to take from the vintage look that greats you when you load up this little gem.

Still, even as it is, it's a great realization of a real classic and kudos is well and truly deserved for all the time and effort that went into producing this. Thanks Nils..very much appreciated.

You really captured the gritty nature of the k1. I own the k3m but I have been looking at k1 rack versions though I may not have to now because of this gem. Good on you and your talents.

Could you send me a recording of that background noise? At what sampling rate do you use it in your host?

It's like a "tick tock" sound that affect the sound, not in first sight but it's audible.

I don't know how send a file here but by the way sorry, hope you'll resolve or probably it's a simulation of the cheap onboard converters of the original hardware? i can't recognize.

Are like little glitches or peaks but very fastidious...

Hi, the clicks are fixed since v1.07. Thanks for reporting.

What a great project. Like a time machine transporting my ears instantly back to the period, thank you.

What's the name of that Wavestation-like patch that loops a couple of strings & aaahhh PCM samples? The preset that was famously used by LFO on their seminal self-titled techno hit "LFO". Would grab this one just to be able to play with that preset. A friend of mine got this as his first synth back in 89.

How do I install it in Cubase 10 Pro, I have placed K1v_x64.dll in various VST plugins folders and each time run Cubase and plugin manager but it seems to be invisible to them, I have even placed in the same folder as my Sylenth1 and no go. Any assistance would be appreciated.

How do I install it in Cubase 10 Pro, I have placed K1v_x64.dll in various VST plugins folders and each time run Cubase and plugin manager but it seems to be invisible to them, I have even placed in the same folder as my Sylenth1 and no go. Any assistance would be appreciated. That is for 64-bit version.

OK, so when I installed the 32-bit version and Jbridged it, it shows up.

Just grabbed this. My studio rebuild is not for another few weeks but will try this out then! I still have my K1-r but this just looked too cool to pass up and realtime JOYSTICK control ala Vector movement? Yes please.

1.0.6 - a very loud short clicks when playing in Renoise 3.1 in some presets. They aren't in Renoise 3.2.1. Empirically, I was found that the problem in the delay of the envelope. As soon as you remove the delay, a clicks disappear immediately.

Also, occasionally K1v misses some notes (in all Renoise versions, not only in 3.1), but I did not find any regularity. But this happens VERY rarely, so I have no special problems with this.

Hi, the clicks are fixed since v1.07. Thanks for reporting.

Version 1.0.4. Thank you SO much for this wonderful VST. I have a very old K1m with a lot of custom patches, and was able to transfer all of them in via sysex without any issues. Also very happy to report that it works in Linux using the Carla Windows bridges. The only issue when running (in Linux) is that none of text displays on the various buttons, or in the middle screen where the available patches are shown. I am assuming this is simply a WINE font issue? Does anyone know what font may be missing?

Hi, the used font is Arial bold to be as compatible as possible. Didn't have Linux in mind but if it helps :).

OMG! I regret selling K1R and finally something that sounds pretty damn good!! Looking forward to seeing this develop.

I was impressed with this plugin. I did a review on it. You can find it here. https://youtu.be/utdAsVkf_q8.

Good morning is there a Linux version coming soon.

Great plugin! ...But my Linux export doesn't work. And another small problem - the waveform selection menu has too small a font.

Hi, this looks great! Is the MacOS version still scheduled?

Average user rating of 4.88 from 8 reviews