ORGANized trio by GSi is a Virtual Instrument Audio Plugin. It functions as a VST Plugin. 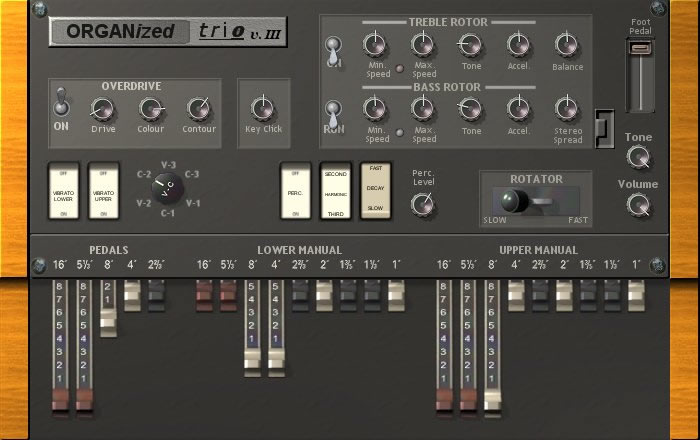 This is the best free B3 clone by far IMO. The author has put a lot of time into it and it shows. I still prefer NI B4 and prefer a real Hammond over that, but you can't beat the value. It sounds best on single note lines. As soon as you play multiple notes the realism drops a lot, due to the basic design - it's made using SynthEdit.

A real Hammond blends up to 9 tones from the tone generator on each note. But, it only has 91 total tones generated, and the tones get reused all over the keyboard. These tones are close to the natural harmonic partials and the basic concept is additive synthesis. NI was able to get fairly close to a real B3 because their program was written from the ground up, and uses a similar method.

Organized Trio was built using SynthEdit, so the author was more limited in what he could do. This is why it's not so good when you play chords and smears. The tones are not reused across the keyboard by multiple notes, so there is too much of some tones compared to a real B3 when you play chords.

The Leslie effect in the latest version is pretty good for a simulator, on par with other simulators.

OT3 is more flexible in controller assignments than the NI B4, although NI B4II fixes that. You don't need MIDIOX to use Organized Trio as you probably will with NI B4. My keyboard puts expression on MIDI CC 7 or 4 while NI B4 requires it on CC 11. No problems with OT3 there. The interface is great. All the features are where I want them, and all the tweaks I want are available. No annoying animated keyboard. I can look at my fingers for that and I don't need eye candy, I need ear candy.

If you want to get Hammond-like tones for free, this is the one to get. None of the other free ones sound nearly as close to me, and I own a real B3 and Leslie for comparison so I know what it should sound and play like.

The author also has some very good Electric Pianos and a large collection of soundfonts on his website. Very cool!Read more

I'm a Native Instruments B4 player. As it's been too long since I've played an actual Hammond, I'll have to compare ORGANized Trio to NIB4 more than the real thing, except for a few details I happen to remember well.

The good news is that it's comparable. Other cheap or free VSTi's I've tried in the past don't quite reach that level.

Overall, it's an extremely lively and playable Hammond clone, and reasonably authentic as well. It correctly implements foldback on both ends of the keyboard. For example, as you go lower on the keyboard, at some point the 16' drawbar tone is replaced by the 8' drawbar tone, because with the 91 tonewheel set of all but the earliest Hammond models, there weren't enough tonewheels to go lower. This happens for other drawbars as well, and at the top of the keyboard too.

The scanner chorus/vibrato sounds very realistic as well. Yes, the vibrato is cheesy sounding -- just as it is on a real Hammond! The chorus is very lifelike and musically performs the function Hammond players love it for. OT's chorus is a little stronger than NIB4's: the C1 OT setting sounds like NIB4's C2, and OT's C2 sounds like NIB4's C3. I don't miss the subtler C1 on NIB4, though some players might.

I find the drawbar sound itself to be quite good, although there are too many overtones in the 16', and this interferes with the clarity of bell-like tones such as 80-000-0008. Instead, it sounds like an Hammond that's in need of a tune-up (a bit too much "leakage"). Some folks like their Hammonds that way.

There's another minor discrepancy between OT and a Hammond or NIB4. In the latter, the sounds all come from the same set of tonewheels. The 16' drawbar sound for C4 is the same sound as the 8' drawbar sound for C3. This is not the case for OT, where each drawbar has its individual tone. However, except for the 16' drawbar, they're all similar enough that this isn't an issue.

Another subtle discrepancy is that OT doesn't emulate Hammond "tone robbing". When you play a lot of keys at once on a Hammond, the total volume is considerably less than the sum of all the individual notes, due to the fact that they're sharing the same tonewheels and the way the summing network is designed. However, I find this less annoying with OT than I do on most synthesizer "B3" settings -- not sure why.

One of the acid tests for a tonewheel clone is a palm slide with fast Leslie and chorus on. On a Hammond, you get a lovely bubbling sound -- something that synths and older clones like Oberheim OB3 just don't get. Well, it sounds just great in OT, much to my delight.

Overall, the sound of OT is brighter than NIB4 (regardless of NIB4 tonewheel set). However, I susepct it's within the range of differences we find from instrument to instrument on real Hammond organs -- or at least, not too far outside that range.

I find the Leslie tube amp sim to be useful but not as good as NIB4's. I wasn't quite able to get the classic heavily overdriven Leslie "grind" sound on the low end that I can with NIB4 (and I don't find the NIB4's tube sim to be quite stellar, either). Perhaps with more fiddling I'd find some magic settings.

Most features are nicely configurable, including the ability to select MIDI controllers for popular functions on the GUI. More MIDI controller configurability would be nice, so that I could set it up to respond the same as NIB4.

I was unable to make it respond to MIDI Expression (cc 11) to control the swell pedal. No doubt with MIDIOX and the documentation I could get that sorted out, though.

To sum up, I don't think this would satisfy a die-hard vintage Hammond lover. Long-time players probably wouldn't be able to use identical drawbar settings from their favorite B3's. But for someone who's looking for a great Hammond-like sound on a budget, Organized Trio is an excellent solution and a prize.Read more

Well, I'm an happy NI B4 owner, Vintage sounds enthousiast and I always love to test to "virtual vintage" stuff. I had already been testing the Organized trio last year and I found it very cheezy sounding, 2.1 just got out and it's really interesting.
First of all it has very good tube amp sim, works really fine. I'm used to get the B4 into the simulanalog guitar suite to get some crunshy organ sound, here you can get some out of the box.
The tonewheels sim is not perfect, in fact it's not as closed to the real thing as the B4 is, but it's really interesting. You can get sounds like M100s and transistors Hammonds, and the beautiful things is Low freq, really deep, works really good. The Keyclick is very bad contact style but works fine, as the percussions.
The Vibrato sounds a bit cheezy, Chorus is far better.
The Leslie Sim is not the best part of the software, after 5 minutes I got the mda Leslie in place of it and got far better result.
You have there also things you don't have on B4, the appreciated Midi remapping functionnalities.
Here is a great freebie a good workhorse for those who need an organ sound sometimes and also a good second tool to get some organ sounds the others can't do.Read more

Average user rating of 3.33 from 3 reviews