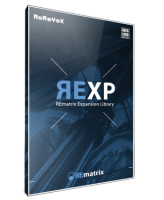 REXP is a collection of 125 pristine impulse responses with 100 individual presets.
Each of these brand new impulse responses has been developed from scratch and carefully tailored for the REmatrix engine, expanding the factory library and enabling thousands of new reverb sounds. Warm Halls, Impact Rooms, Airy Plates, Dense Early and very creative Special IRs; these are just a few words to introduce some of REXP's sounds.

The 100 included presets have been designed in real mixing sessions and are a great time saver when using REXP.