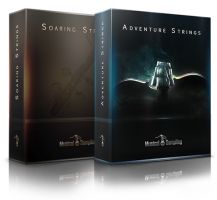 Over a year in the making, recorded in the same room with the same number of players, this collection epitomizes all of our sampling disciplines to date. With an emphasis on strong, energetic performances, the Soaring Adventure Bundle is a versatile assembly of articulations designed for a variety of dramatic, musical contexts.

With four layers of legato samples, Soaring Strings adapted a uniquely musical approach to recording the legato intervals. Coupled with some inventive programming techniques and LOTS of polish, the resulting legato instruments are affecting, smooth and responsive.

By sourcing all the short articulations from repetition phrases, Adventure Strings became an exercise in post-production patience. The result? Shorts with real momentum, consistency and an affinity for round-robin fans.

Soaring Strings
We wanted performances that catered to... (yes, I have to say it) soaring string lines and dramatic passages by having the players really dig in with the vibrato and giving us all they had with the triple forte dynamic. This also meant approaching the sessions in a unique, musical way to capture the kind of singular legato we were looking for.

Another focus was to dial things back with what we felt was necessary to produce credible string arrangements in a shorter amount of time. This involved creating a single, natural mix and omitting seldom-used legato articulations. We also developed a "Sustain Sync" feature that synchronizes the starting sustain with the following intervals/repetitions, which saves you from having to make adjustments to start-notes to closely match the intervals timing upon quantization. Lastly, we included a "To Silence" button that can enable the modwheel to completely diminish the softest dynamic to silence. This not only provides unique possibilities with expression, but also saves the need to use another controller to simulate a decrescendo to "niente".

We also agreed that recording medium-sized ensembles in their traditional seating arrangement would not only provide enough "solo-istic" detail in the recordings, but would have a more natural transparency when writing harmonies.

After various tests throughout the year, months of recording, editing, programming and bringing the polish as far as we could -- we're thrilled to finally share our debut offering, Soaring Strings. Happy composing!:

Adventure Strings
The follow-up to our debut offering, Soaring Strings. Performed by the same number of players, recorded in the same room, seated in their traditional positions -- both share the same performance aesthetic. Strong, passionate and relentlessly energetic.